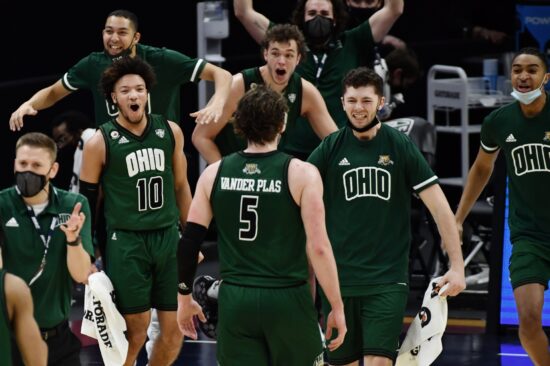 The (16-7) Ohio Bobcats will clash with Virginia Cavaliers (18-6) in the NCAA 1/32-finals on Saturday, March 20 at 7:00 pm ET at Simon Skjodt Assembly Hall Bloomington, IN. It will mark Ohio’s first appearance in the NCAA Tournament since 2012, when they beat Michigan and South Florida, only to lose to No.1 seed North Carolina (65-73) in overtime.

Virginia have received a double-bye as the No.1 seed but decided to withdraw from the AAC Tournament due to a positive COVID-19 test of its personnel. Due to health concerns, Virginia weren’t even sure whether they would be playing this game but ultimately decided to try and defend their title from when they beat Texas Tech 85-77 in overtime in the 2019 NCAA finals.

Ohio Bobcats find their stride at the right time

Ohio enter this match with just one ATS loss in their last ten games and an impressive 16-7 overall record. They dominated the Mid-American Tournament, where they won three games by a total of 44 points and completely smashed the second-seeded Buffalo (84-69) in the grand finals to win their first silverware in eight years.

Ohio’s scoring efficiency went through the roof of late, having made 49% more shots in seven of their last eight games compared to early-season and have been 50% or better from the 3pt-line in there of their last six. What’s more, Ohio are one of the best passing teams in the league that doesn’t hesitate keeping their games at a fast pace while making little to no mistakes.

Virginia Cavaliers have not looked too sharp ATS of late, failing to cover in five out of their last six games, and are 1-3 ATS in their last four outings on a neutral site. However, they enter this match with only one loss in their last nine and on a three-game winning streak, having beaten Miami Florida (62-51), Louisville (68:58), and Syracuse (72-69) in their last three outings.

Like Ohio, Virginia boast potent scorers in Sam Hauser (16ppg, 6.7 rpg), Jay Huff (13.1 ppg, 7.1 rpg), and guard Trey Murphy III (11.3 ppg), who have proven difficult to stop for most of the teams in the league. If things don’t go well inside, Virginia can always count on Hauser from the 3pt-line, where he has made 62 shots this season with a 43.4% accuracy.

Virginia’s accurate shooting and strong inside presence will play a crucial factor in this bout, seeing how Ohio are not exactly strong on the boards and can be hardly regarded as a strong defensive team. That leads us to believe Virginia should be in a very good spot to secure the W if they don’t waste too many possessions.

Even though Virginia have been playing good basketball throughout the whole season, they seem a bit overhyped due to the fact that they’re the reigning champions. What’s more, they haven’t had a particularly good end of the season, so it’s hard to argue they can’t suffer an early exit from the tournament.

Who will win the Ohio vs Virginia game:

Virginia are a strong team; however, they seemed mediocre most of late. Their forced exodus from the AAC Tournament hasn’t done any good for the team’s morale, and although that’s a rather small factor to consider, everything should be taken into account for a match of this importance.

The most concerning is the fact that Virginia have played their last game on Saturday, March 11, meaning they will have gone nine days without playing, so some ring rust is expected. And while the effect of taking a long break are rather uncertain, it won’t do them any favors against the relentless Ohio offense.

As long as Ohio can keep their defense solid and force Virginia into making mistakes, the Bobcats should do more than fine in their return to the NCAA Tournament. This should be an intense match with no clear winner, and while Virginia are rightfully priced as the favorites, the +7 on Ohio is way too generous to pass on.