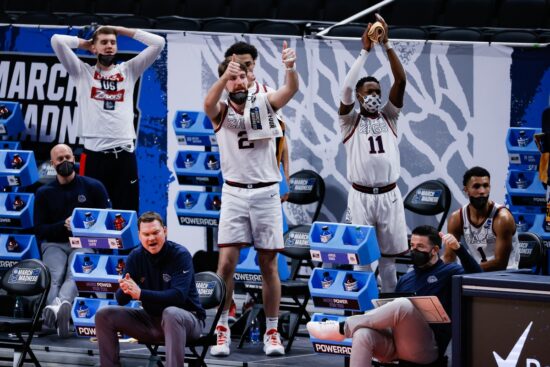 The Oklahoma Sooners survived their first round matchup with Missouri, winning 72-68 even without their second leading scorer De’Vion Harmon, who is out the first two rounds after a positive COVID test. The degree of difficulty ramps up tremendously on Monday though, against the 27-0, #1 overall seed Gonzaga Bulldogs.

The Sooners had a #8 vs. #9 matchup in the round of 64, but it was a tough 4-point win over Missouri even as just +1 point underdogs. It was very convenient to pick against the Sooners in the first round, they had lost four straight to close out the regular season and struggled in a 79-73 Big 12 tournament opener against 2-21 Iowa State.

The fact that OU was/is without Harmon and his 13.0 ppg doesn’t do the team any favors either. Harmon had 18 to help get the win over the Cyclones in the conference tournament, and had 12+ in five of the last six. One would think you’d need as many hands on deck as possible against undefeated Gonzaga.

What the Sooners did show in their opening round win is that they can stay competitive when they get hot. Brady Manek considered his late season resurgence while hitting 5-9 three pointers vs. the Tigers en route to 19 points. Austin Reaves also stayed on fire, scoring 20+ for the 6th time in the last 10.

It’s the age old question when it comes tournament time for Gonzaga – were they good this season or just a product of very weak opponents? The Bulldogs have done a better job of challenging themselves in recent years though, including games against Kansas (102-90), West Virginia (87-82), Iowa (99-88), and Virginia (98-75) as part of their non-conference schedule this season.

Gonzaga’s 99th ranked adjusted strength of schedule, including 105th in opponents offense and 104th in opposing defense doesn’t mean the Bulldogs aren’t talented. Corey Kispert is a 1st team All-American, while Jalen Suggs and Drew Timme made the 2nd team. Once again though, the competition they played.

Who will win the Oklahoma vs Gonzaga game:

If OU had Harmon in this one it could be a different story, not just to cover the whopping +14.5 spread but for an outside chance at the upset. Gonzaga hasn’t been challenged in awhile, and OU can still keep things close as Reaves is playing well and Manek is finally starting to play up to his potential.