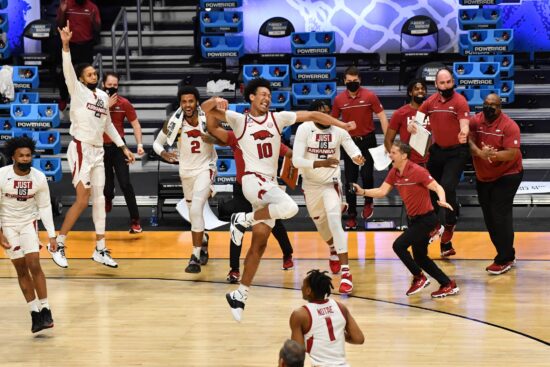 The Golden Eagles have an opportunity to be the first No. 15 seed to reach the Elite Eight when they face off against the No. 3 seed Arkansas Razorbacks.

Arkansas are back in the Sweet 16 for the first time since 1996 under second-year head coach Eric Musselman. The Razorbacks slipped past Texas Tech 68-66 in the round of 32.

Razorbacks back in the Sweet 16

The Razorbacks come into this game at (24-6) on the season. They average a high scoring 82 points per game, so this group will be more than comfortable getting into an up and down with a lot of offense.

6-6 guard Moses Moody leads the Razorback with 17.1 points and 5.8 rebounds, but he is only one of the many scoring options this team has. Forward Justin Smith poured in 20 points in the win over Texas Tech, and guard Jalen Tate, and Davonta Davis also averaged double digits over the course of the season.

Oral Roberts are (17-10) on the season and average 81.5 points per game under fourth-year head coach Paul Mils. They used that high-powered offense and volume shooting to upset No. 2 seed Ohio State and No. 7 seed Florida in the opening weekend of the NCAA tournament.

Max Abmas is on fire

6-1 guard Max Abmas leads the country in scoring at 24.5 points per game. Junior forward Kevin Obanor averages 19 points per game and 9.6 rebounds on the season. Abmas and Obanor combined to score 113 points in the Golden Eagles’ first two tournament victories. That is nearly 60% of the team’s offensive production.

The guard play on both of these is strong, but the inside matchup will be the key for both ends. Obanor has been so far in the tournament and was very active on the glass. His ability to step out and shoot will put pressure on the Razorbacks. The big man has fouled out four times this season, and he cannot afford to get costly fouls in this game. The Razorback could test that early with big man Justin Smith who is great at playing physically and with his back to the basket.

Who will win the Oral Roberts vs Arkansas game:

Arkansas has gotten off to very slow starts this NCAA tournament and has had to claw their way back into games before the half. A slow start might spell trouble for this group here, but in a game that is potentially going to offer very little defense so this should be back and forth for most of the contest.

This could be the highest-scoring game of the Sweet 16, given the pace that both of these teams want to play at. Arkansas has given up ten or more threes in a game nine times this season but have only lost one of those games.

Obanor will need to control this game at both ends for Oral Roberts to have a chance and to make history. In their first two wins over the Buckeyes and Gators, Oral Roberts has gotten 63.5 shots, and Arkansas is more than willing to play that style, given they are sixth in the nation in shot attempts per game at 64.7 on the season. Arkansas is going to steadily pull away with some timely stops late in this game.