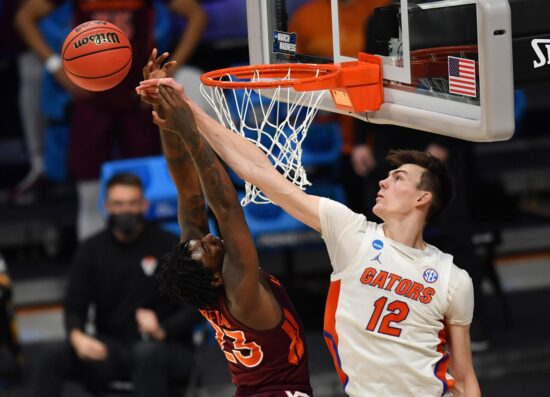 Coach Mike White continued his string of first-round victories as the Gators head coach, and the Golden Eagles will look to become only the second 15 seed to reach the Sweet 16.

Max Abmas has only scored under 20 points once in the last 13 games. But, this Florida defense will be the best until Abmas, and Oral Roberts have seen since Oklahoma State back in early December. Florida should have no problem scoring against Oral Roberts as the defense ranks 247th in the nation.

For anyone who knows the story of this year’s Oral Roberts team was not shocked when they pulled off the upset of Ohio State. They went on the road early in the season and lost by only five points to NCAA Tournament teams in Wichita State and Oklahoma State.

The Golden Eagles love to play up-tempo and knock down three-pointers. Oral Roberts is 12th in three-point percentage, 13th in turnover percentage, and first in free-throw shooting.

Abmas isn’t the only one on this team who can shoot it. Oral Roberts is 8th in the nation in percentage of points scored by three-pointers.

Oral Roberts is 134 in Kenpom. The offense is 71st in efficiency, but the defense only ranks 247th.

The Gators have lost in the second round in their last two tournament appearances. In 2017 Florida advanced to the Elite 8 before falling to South Carolina.

Tre Mann is the leader for Florida. Mann leads the team in scoring (15.9) and assists (3.4). He is coming off 14 points, four-assist performance against Virginia Tech.

Colin Castleton is the inside threat for the Gators. He was the standout player in the first round as he produced a double-double with 19 points and 11 rebounds. Castleton is second on the team in scoring and leads the team in rebounds (6.2) and blocks (2.2).

Kenpom has Florida as the 36th ranked team in the nation. The offense is 39th in offensive efficiency and 38th on defense.

Who will win the Oral Roberts vs Florida game:

Ohio State was a great matchup for Oral Roberts as they were an offense-first team. The Gators really play defense, and the points will not come quite as easy for Abmas and Kevin Obanor. The dynamic duo will still put up good numbers, but it won’t be enough to continue the Cinderella story. Florida advances and covers the 8.5-point spread.