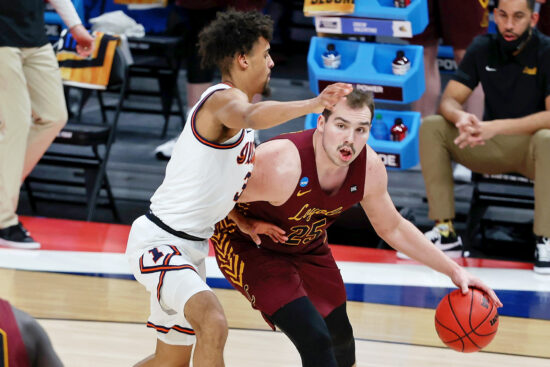 The Beavers are going to have their hands full facing the king of the Missouri Valley in Loyola. The Beavers are coming off a win against Oklahoma State, and the Ramblers upset No. 1 seed the Illinois Fighting Illini.

The Beavers have been shooting lights out of their last few games. Over the current stretch of their hot run, this team is shooting over 52% from the field, which has helped carry them. Aside from the tremendous shooting, this team is doing a great job at rebounding and playing team defense.

They did a great job of making Oklahoma State star point guard Cade Cunningham feel uncomfortable all game long and held the Cowboys to 28% shooting throughout the game.

Loyola isn’t going to run anyone out of the gym as they make you play at their pace, but the Beavers are more than capable of playing like that. They move the ball well and do a good job of getting to the free-throw line as it hit 32 of 35 against OK state.

From the tip, Loyola was in control of the Illinois game giving the Illini all they could handle thanks to that No. 1 defense in the country. They were great at forcing the Illini off the three and valuing possessions by moving the ball and hitting open cutters for easy buckets.

Allowing only 56 points per game, the Beavers are going to struggle to go on any type of runs. Oregon State have a hard time with defending and not fouling, so this game should stay at the pace the Ramblers want in free throws and quality possessions.

Who will win Oregon State vs Loyola Chicago game:

Loyola were great on the offensive end by spacing Illinois out and taking advantage of their overplay on the defensive end with great set calls and back cuts for easy baskets.

The Ramblers were excellent at not letting Ayo Dosunmu get downhill and get his game going. They trapped him off-ball screens forcing him to give it up, and made it to where the other guys had to find a way to win.

Senior C Cameron Krutwig was terrific around the rim and with his passing against the Illini. He finished with 19 points, 12 rebounds, and five assists.

Oregon State guard Ethan Thompson had 26 points and seven rebounds in the win over Oklahoma State. It’s right to assume the Ramblers will defend him like they did Dosunmu, forcing the ball out of his hands and making him a nonfactor in the game.

The Beavers have played very well on both ends of the floor, but the Ramblers only have one guy that scores over nine ppg on the season. It’s hard to get this team out of their style, and they do a good job spreading the wealth and valuing the basketball.

Despite their hot shooting, all runs must come to an end. The suffocating defense by Loyola will prove to be too much for the Beavers. Ramblers move on to the Elite 8, and the Sister Jean saga continues.