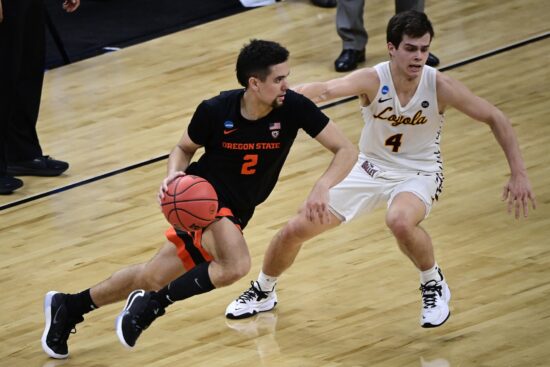 Oregon State needed to win the Pac-12 Conference Tournament to even make it to the NCAA Tournament, but the Beavers now have a ton of momentum. Houston brings a 27-3 record into this game, and they have been sharp since the season opener.

The winner of this game advances to take on the South Region winner, and the Baylor Bears and Arkansas Razorbacks meet up in that Region.

The Oregon State Beavers are shooting right around 35 percent from the three-point line, but they have lit it up at times in the NCAA Tournament. Oregon State wants to push the tempo, and they don’t want to have to deal with the relentless defense from Houston.

Ethan Thompson leads this team with 15.8 points and 3.8 assists per game, and he will have to be great on Monday night. The Beavers have been giving up some points, but they want this to be a much higher-scoring game.

The Houston Cougars are holding opponents to just 57.5 points per game this season, and they have actually been better than that in this tournament. Houston limited an explosive Syracuse offensive team to just 46 points, and will look to do the same against Oregon State.

Houston also has the ability to shoot the ball well from the three-point line as the Cougars are making 36 percent of shots from deep. The Cougars will try to slow this game down and look for great shots on the offensive end.

Quentin Grimes leads this team with 18 points per game, and he has the ability to take over a game at any time.

Who will win the Oregon State vs Houston game:

Don’t expect a ton of points in this game, as both teams will be looking to guard extremely well. Oregon State has a slight edge in terms of size and athleticism, but few teams are as tough as the Houston Cougars.

Houston was able to completely shut down a great Syracuse team in the Sweet 16, and they could put another low number on the board against Oregon State.

Houston wins this game to advance to the Final Four, but the Oregon State Beavers will keep it close.