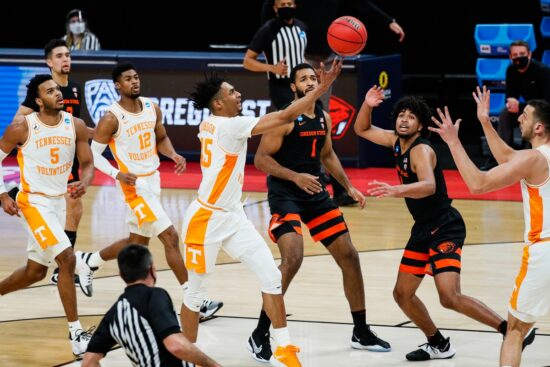 It’s your classic #12 vs #5 matchup in the NCAA tournament that is such a popular upset pick. The big question coming into this game is if the Oregon State Beavers are still hot as they head into a matchup with the Tennessee Volunteers. OSU finished 6th in the Pac-12, but rattled off three straight victories and get the conference’s automatic bid. Tennessee on the other hand is faltering down the stretch.

It was arguably the story of Champ Week, a Beavers team that was picked to finish last in the Pac-12 go on a run to win the conference tournament and punch their ticket to March Madness. OSU now has wins in 6 of their last 7 games, all but one of them as an underdog. Make no mistake, Tennessee knows how good this team is.

That remarkable run last weekend included an 83-79 OT win over UCLA, beating #1 seed Oregon 75-64, and topping Colorado 70-68 to capture the school’s first ever conference tournament title. Each one of those teams Oregon State ran through has also made the tournament, so the Beavers are a confident bunch right now.

It’s been a balanced effort to help Oregon State make an unlikely NCAA tournament berth. Four players averaged in double figures in the Pac-12 tournament, and Jarod Lucas, Warith Alatishe, and Ethan Thompson have all had a 17+ point outing over the last three games.

Tennessee is a lofty -7.5 favorite in Friday’s game, a number that seems a bit high considering the reports that John Fulkerson has not yet passed concussion protocol. Fulkerson averaged 9.5 points and 5.7 rebounds, not crazy numbers to replace but he’s also a 5-year player that provided Senior leadership.

Oddsmakers like the Volunteers to win big even without Fulkerson, and Tennessee was able to hold off Florida 78-66 even after their 4th leading scorer went down following a couple elbows from the Gators’ Omar Payne. The Vols shot 53% in the second half of that game, and were up 15 points in the second half against eventual champion Alabama in a 68-73 loss that knocked UT out of the conference tournament.

Much like Oregon State, Tennessee relies on a very balanced attack. Jaden Springer, Keon Johnson, and Victor Bailey all scored at least 10 ppg on the year. The unfortunate thing for the Volunteers is that their balance didn’t lead to a whole lot of wins down the stretch. Tennessee has flip-flopped wins and losses over their last eight games including the postseason – which actually may bode well coming off a loss.

Who will win the Oregon State vs Tennessee game:

Oregon State just got battle tested in three straight games by tournament teams, and they won each one. The Beavers would have value as 3 or 4 point underdogs, but 8.5 seems ridiculous.