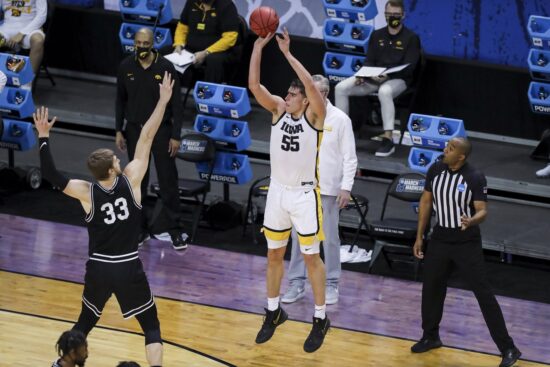 The NCAA has switched things up in 2021, instead of Friday-Sunday games we’ve got Saturday-Monday. The Oregon Ducks and Iowa Hawkeyes get the Monday slate started, and is it safe to expect both teams coming out flat with a 12:10 PM ET weekday start time? Oregon could especially have a slow start, as this is their tournament opener after the game with VCU was declared a no contest.

Ducks Up Against It

Some teams would look at advancing to the round of 32 without having to play a game as a good thing, but it really does you no favors in trying to get to the Sweet 16. Some higher seeds use that first round game as a way to shake off the rust and get used to a neutral site court, but the Ducks didn’t get that opportunity.

You could also look at it with another angle, in that OU is extremely fresh coming in as just +5 point underdogs. Oregon hasn’t played since a March 12th loss to in-state rival Oregon State in the Pac-12 tournament. That’s a lot of time to stew after dropping a 64-75 game as -8.5 favorites. The Ducks were the #1 seed in their conference tournament as well.

The past is the past, how does Oregon beat Iowa? The Ducks are fueled by their offense, which doesn’t put up a ton of points (74.1) but has the #14 ranked adjusted efficiency in the country. The Ducks feature five players averaging double figures, led by the duo of Chris Duarte and Eugene Omoruyi who combine for over 34 ppg.

Iowa Ready to Get in Tourney Mode

Oregon was 19-5 and tops in a Pac-12 conference that sent five teams to the tournament. Iowa is cool with that, as they played in the Big Ten where only five of the 14 teams didn’t make the NCAAs. Unlike the Ducks, Fran McCaffrey’s Hawkeyes squad was able to get their first round game in, another high scoring affair in an 86-74 win over Grand Canyon as -13.5 favorites.

The Hawkeyes did not cover the spread in their first round matchup, and 74 points is a lot to give up to a WAC team. That’s been an issue for Iowa this year though, as they ranked tops in the Big Ten and 4th in the country scoring 85.0 ppg. The Hawkeyes also had the 4th worst defense in the conference though.

The good news is that Iowa can score on anybody, as they were 2nd in the country in offensive efficiency while also up against the 6th toughest strength of schedule in adjusted opponents defense. Oregon is going to have a tough time stopping Luka Garza, the player of the year candidate who had 24 points in the tournament opener.

Who will win the Oregon vs Iowa game:

This game is likely to come down to how big of a lead Iowa can get in the first half before Oregon starts their comeback. The Hawkeyes defense is going to have a tough matchup here, but the Ducks will also likely be a little flat since this is their tournament opener. The constant here is that there will be points scored in bunches.