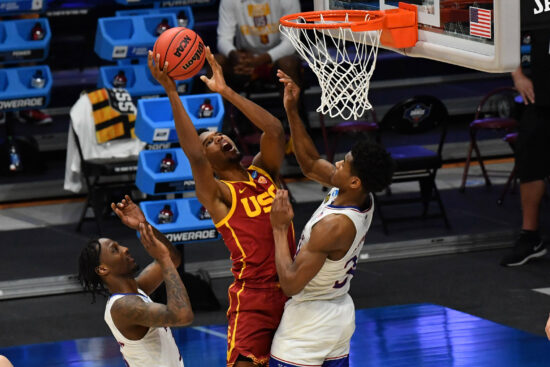 The West Region of the NCAA Tournament has some Pac-12 flavor as a pair of teams from that league will meet up on Sunday night. The seventh-seeded Oregon Ducks take on the sixth-seeded USC Trojans in the Sweet 16 for a chance to advance to the Elite Eight.

Oregon won the regular-season Pac-12 title this year, but the Trojans were right behind them. Both teams pulled off impressive upsets in the second round to set up this showdown.

The winner of Gonzaga-Creighton awaits this winner, and a spot in the Final Four is just two wins away.

The Ducks scored 95 points in the win over Iowa in the second round, and they will try to push the tempo against USC. Oregon was held to just 58 points in the regular-season meeting against the Trojans, and it has to find a way to score more points.

Guard Chris Duarte leads this team with more than 17 points per game, and he is the engine that drives this Ducks team. Oregon is shooting 38 percent from the three-point line, and they have the ability to light it up in a hurry.

If Oregon is able to speed this game up, then it has a shot at moving on to the Elite Eight.

The Trojans are led by freshman forward Evan Mobley, and he has all the skills needed to be a future NBA star. Mobley is a double-double machine, and he should have a big game against an undersized Oregon team.

USC wants to turn this into a defensive battle, and that defense was able to completely shut down Kansas in the round of 32. The Trojans are not a team that has a ton of depth, and controlling the pace will be a huge key.

Who will win the Oregon vs. USC game:

This game is going to be tight throughout as both teams are familiar with each other. USC is going to try to win this game in the paint while Oregon will try to push the tempo and create some havoc.

The Ducks do have the ability to score the ball well against USC, but it’s going to be hard for Oregon to get stops on defense. USC has a huge size advantage down low, and Mobley will be a difference-maker in this game.