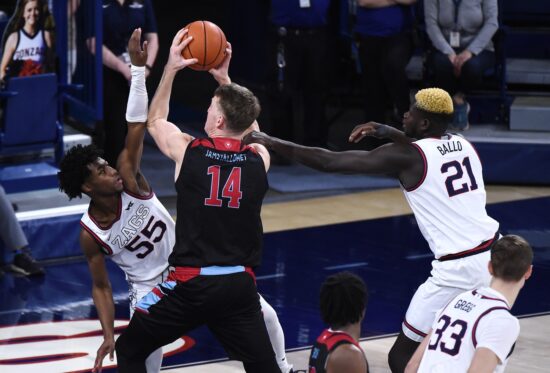 The Saint Mary’s Gaels and Gonzaga Bulldogs will square off on Monday night in the semifinal rounds of the West Coast Conference Tournament. These two teams have a history of meeting up in this tournament, and they have had a terrific rivalry over the years.

The winner of this game will advance to the West Coast Conference finals, where they will meet up with the winner of Pepperdine/BYU on Tuesday night. Gonzaga swept Saint Mary’s in the two regular-season games in 2020-21.

Saint Mary’s is averaging just 64.5 points per game this season, and that could be a major problem in this game. The Gaels are holding opponents to just 61.6 points per game, but it will take a huge offensive effort to upset the Gonzaga Bulldogs.

Guard Logan Johnson leads the team with 13.4 points per game, and he will need to carry the team on Monday night. The Gaels are shooting just 30 percent from the three-point line, and it will take a hot-shooting night to pull off this stunning upset.

Gonzaga Doing it All Well

The Gonzaga Bulldogs are averaging 92.9 points per game while holding opponents to just 69.3 points per game. Simply put, Gonzaga has absolutely obliterated their opponents all season long, and they will be the number 1 overall seed in the NCAA Tournament.

Corey Kispert leads the team with 19.5 points per game, but there are four different players scoring at least 11.3 points per game. Gonzaga is shooting 36 percent from behind the arc this season, but they are also able to score inside the paint.

Few teams have been able to slow down Gonzaga this season, and that has been the case against Saints Mary’s so far this season.

Who wins the Saint Mary’s vs Gonzaga game tonight:

Gonzaga has dominated Saint Mary’s in both matchups already this season, and nothing should change in this game. The Bulldogs are the best team in college basketball, and they will waste little time in taking control of this game.

Saint Mary’s has been a thorn in the side of Gonzaga over the past decade-plus, but this is just a complete mismatch this season. Gonzaga is an offensive juggernaut, and they will blow this game wide open in the first half.