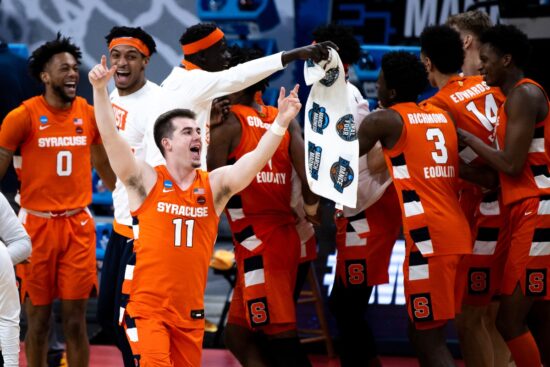 The winner of this game will take on the Loyola Chicago/Oregon State winner, and this Midwest Region is suddenly up for grabs. This game will feature a red-hot offense in Syracuse up against a terrific Houston defense.

Orange On Fire From Deep

Buddy Boeheim has been on an absolute tear, and he had 25 points in the upset win over West Virginia. Syracuse made 14 three-pointers in the win over the Mountaineers, and they have the ability to light it up once again.

The Orange have been giving up some points on the defensive end of the floor, but their 2-3 zone is always a tough defense to prepare for in the NCAA Tournament.

The Houston Cougars also have the ability to score a ton of points, but they don’t want to get into an up-and-down game with Syracuse. Houston is dealing with some injury concerns, and depth could be a major concern against the Orange.

Guard Quentin Grimes leads this team with 18 points per game, and he will need to be an absolute star to push Houston past Syracuse. The Cougars are shooting 36 percent from deep, but finding holes in the Syracuse zone is never an easy task.

The real strength of this Houston team is on the defensive end of the floor, as they are allowing just 57 points per game. The Cougars aren’t going to hold Syracuse to that number, but keeping them under 70 will give them a chance to advance.

Who will win the Syracuse vs Houston game:

The Houston Cougars have been the better team throughout the entire season, but that doesn’t matter much at this time. Syracuse has been on an absolute tear in the NCAA Tournament, and they are the team with all the momentum.

Syracuse has too much length for Houston, and they will make life difficult on the Cougars’ offense. The Orange are going to shoot their way to another victory, and this team has a legitimate chance of winning it all.