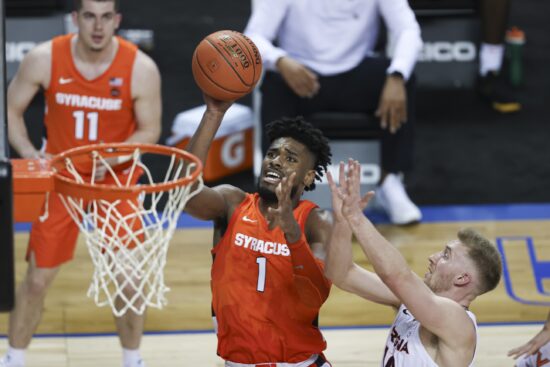 The Syracuse Orange will take on the San Diego Aztecs in the First Round of the NCAA Tournament in the Midwest Region. Syracuse is the 11th seed in the Midwest, while San Diego State is the 6th seed. The winner of this game will advance to play the West Virginia-Morehead State winner.

Syracuse Can Shoot It

Syracuse is averaging 75.8 points per game this season, and most of that damage comes from behind the three-point line. The Orange aren’t afraid to take shots early in the possession, and Buddy Boeheim is one of the best shooters in the country.

The Orange are actually making just 34 percent of their shots from the three-point line, but this team can get hot in a hurry. Boeheim and Alan Griffin have combined for 31 points per game, and each is shooting nearly 38 percent from deep.

Syracuse is allowing more than 70 points per game, but that 2-3 zone has the ability to mess with teams in this tournament.

San Diego State is holding opponents to just 60 points per game this season, and they want to win this game on that end of the floor. The Aztecs don’t want to turn this game into a track meet, as they won’t have the depth to keep up with a team from the Atlantic Coast Conference.

San Diego State is scoring more than 74 points per game, but they feasted on some weaker defensive teams. The Aztecs are shooting better than 37 percent from behind the arc, and that could cause some problems for the Syracuse zone defense.

Who will win the Syracuse vs San Diego State game:

San Diego State comes into this game with a much better regular-season record, but none of that matters once the NCAA Tournament begins. Syracuse has a history of going on historic runs through the NCAA Tournament, and they could repeat history once again this year.

The Aztecs have not faced a 2-3 zone all season long, and Syracuse plays that defense better than anyone. This should be a tight game throughout, but the Orange simply have too much size for the Aztecs to overcome.

Expect a close and exciting match, but in the end, it will be the Syracuse Orange advancing to the Second Round with an upset win over San Diego State on Friday night.