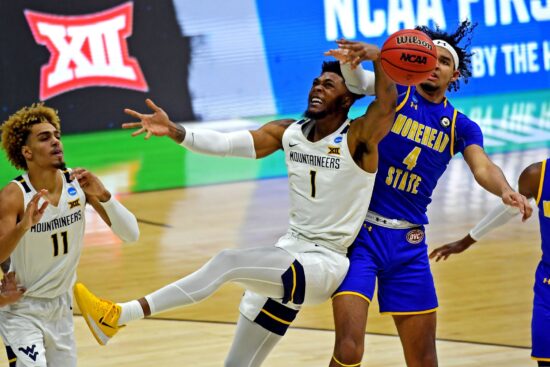 Things start to get real interesting in the Midwest region when the #11 Syracuse Orange meet the #3 West Virginia Mountaineers at Bankers Life Fieldhouse in Indianapolis. The Orange scored an upset perhaps in seeding only when they dominated San Diego State on Friday, and look to be just getting warmed up. WVU looked good in their opener too though, which is why they are -3.5 favorites here.

The Orange were a +3 point underdog heading into their opening round matchup with San Diego State. It looked like the wrong team was favored in that ACC vs. Mountain West contest and that proved to be correct as Jim Boeheim’s team pulled out a 78-62 win.

The win in the tournament opener was another strong showing for Syracuse, who won 5 of their last 7 down the stretch. The Orange won their last two in the regular season, 72-70 vs. North Carolina and 64-54 against Clemson, both tournament teams. Syracuse then beat NC State in the ACC tournament before falling 72-69 to Virginia on a last second three-pointer. That’s a solid run for the Orange.

Syracuse topped the MWC champ San Diego State by 16 points thanks to a whopping 30 from Buddy Boeheim. The coach’s son has been on a roll with 26+ points in three of his last four games. The 78 points from the Orange came against an Aztecs defense that was 21st in the nation in adjusted defensive efficiency. WVU is 65th in that category.

What Do We Have in WVU?

The Mountaineers are hard to get a read on here. There are some signs that they could be getting into a groove of their best ball of the year, winning 7 of their last 10 in the regular season with the losses coming to Oklahoma, Baylor, and Oklahoma State, who have all made the tournament. That stretch also includes ins over Kansas, Oklahoma, and Texas Tech who have all also made the NCAAs.

West Virginia dominated Morehead St. in the first round of the tournament, 84-67 as -13 point favorites. Miles McBride stepped up in the opener with 32 points, and three other Mountaineers players had at least a dozen. That was against a Morehead St. team that was 132nd in KenPom rankings though.

Sunday’s game could be on the high scoring side. West Virginia is 10th in adjusted offensive efficiency this season while Syracuse is 14th. The teams also rank 65th and 95th respectively in adjusted defensive efficiency. (Buddy) Boeheim is on fire, and McBride poured in 30 in the tournament opener for WVU.

Who will win the Wisconsin vs Baylor game:

Syracuse had the #2 offense in the ACC this season, an impressive feat in a conference that sent 7 teams to the NCAA tournament. The Orange will score here, but their defense is a huge liability. WVU can put up the points too, and have a much more balanced scoring attack with the likes of Jarrett Culver and Taz Sherman available to give McBride some relief.