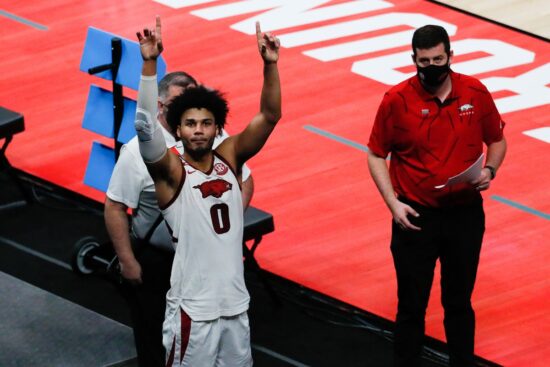 The Texas Tech Red Raiders are dangerous this time of year. Prior to last year’s tournament getting canceled because of the pandemic, TTU has made the NCAA finals and an elite 8 the last two trips to March Madness. The Arkansas Razorbacks are very much an unknown, an explosive team but also in their first trip to the tournament under 2nd year coach Eric Musselman. This one seems like a toss-up.

Arkansas likes to get out and run with the 12th fastest pace in the entire country. That goes against everything Texas Tech stands for though, as the Red Raiders boast the nation’s #18 squad in adjusted defensive efficiency. TTU allowed the 27th fewest points/game during the regular season, and were a top 50 squad in opponent’s field goal percentage.

The Red Raiders’ defense was on full display in their tournament opener, holding Utah State to 53 points. TTU showed a vulnerability on the post though, as Utah State 7-footer Neemias Queta had 11 points, 13 rebounds, and 6 assists. 5 of the Razorbacks’ top 6 scorers are guards though, which definitely favors Texas Tech.

If the tempo does move to a quicker game like Arkansas prefers, Texas Tech should be ready to go to battle. The top four scorers for the Red Raiders are guards, led by Mac McClung who had 16 points in the tourney opening win over Utah State. Terrence Shannon, Kyler Edwards, and Kevin McCullar are all good for about a dozen points per game.

One thing to note about Arkansas is that they were great this year, but their 23-6 record was largely built on going 16-1 at home on the year. That means a 7-5 record at home or on neutral courts, not especially horrible but not good either.

The Razorbacks did beat Missouri in the SEC tournament before falling 71-78 to LSU, both NCAA tournament teams. Arkansas was up only three points at the half against Colgate in their tournament opener, but a 49-35 stretch in the second paved the way for Musselman’s squad.

Justin Smith powered the Razorbacks in their win over Colgate with 29 points and 13 rebounds. It was the third time in the last five games that Smith went for 20+, so he’ll be a force to be reckoned with. Speaking of forces, Moses Moody has 28 points in three of the last five, and led Arkansas with 17.5 ppg on the season.

Who will win the Texas Tech vs Arkansas game:

This meeting is looking like a close one, and it’s the ultimate offense vs. defense matchup. In a neutral site game where shooting is more likely to fail, side with the defense. That, and Chris Beard just knows how to win this time of year.