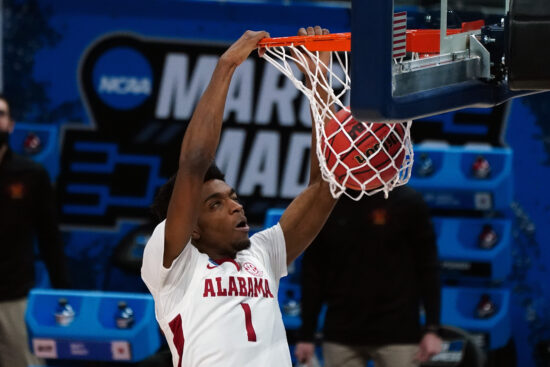 Day one of the Sweet 16 is in the books, and what a fun Saturday of NCAA hoops it was as four teams have already punched their tickets to the Elite Eight.

Sunday’s action showcases one of the most storied programs in college basketball, the 11th-seeded UCLA Bruins, who are set to face a program known more for football but has had an incredible basketball season in the second-seeded Alabama Crimson Tide.

Bruins Peaking At The Right Time

The Bruins (20-9) last appeared in the Sweet 16 in 2017. Under second-year head coach Mick Cronin, the Bruins have started playing their best basketball at the right time, as they are one of four Pac-12 teams remaining in the tournament.

UCLA has been very good from beyond the arc in the tournament, hitting 24-of-56 (42.9 percent) in its three wins thus far. The Bruins topped Michigan State in the First Four, then upset BYU before topping Abilene Christian.

UCLA is led by Johnny Juzang and Jamie Jaquez Jr., who have carried much of the scoring load throughout the tournament. Juzang is the leading scorer, averaging 22.3 points per game, while Jazquez is sitting at 16.7 points. The combination of these two has kept the Bruins’ run alive.

Riding an eight-game winning streak, the Alabama Crimson Tide are 26-6. The Tide are looking for the team’s first Elite Eight appearance since 2004, and second-year coach Nate Oats has guided his team to a pair of double-digit wins over Iona and Maryland thus far in the bracket.

Alabama is shooting 44.7% from three-point range in its two tournament games, hitting 21-of-47 attempts. The Crimson Tide can also defend the three, holding opponents to 30%.

Forward Herb Jones is the Tide’s leader, as he is averaging 11.3 points and 6.5 rebounds. The trio of solid guards who are averaging double-digits in Jaden Shackelford (14.3), Jahvon Quinerly (12.7), and John Petty (12.5), have helped spark the Tide’s double-digit wins. Alabama has eight players who average at least five points per game, so bench depth will be vital against a tough UCLA team.

Who will win the UCLA vs. Alabama game:

The Bruins are an interesting matchup for Alabama if the duo of Juzang and Jaquez can play well again. The Crimson Tide still match up well on the perimeter, and Jones should look for his shot and exploit mismatches a little more in this game.

The Bruins can steal this game if they can continue to shoot well from three-point range, but with how the Crimson Tide have defended the three, it’ll be tough for the Bruins to get easy looks.