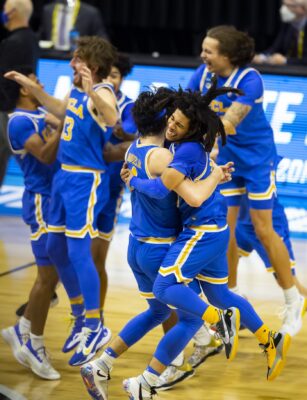 The Final Four features a matchup between a team everyone expected to reach the Final Four and a team nobody expected to. The Gonzaga Bulldogs, the top overall seed in the tournament, take on the 11-seed UCLA Bruins in a matchup to determine who will represent the West coast against a Texas team in the national championship game.

It was expected that Michigan would win the East regional final and set up a showdown of one-seeds against Gonzaga. But the UCLA Bruins put a stop to those plans thanks to an incredible defensive performance against the Wolverines. UCLA held Michigan to 49 points to take their Elite Eight matchup and make it to the Final Four.

The Elite Eight marked the second time during this NCAA Tournament that UCLA held an opponent under 50 points and the third time they held an opponent under 65. The question for UCLA will be whether their defense will be enough to slow down a Gonzaga team that has looked simply unstoppable offensively so far this season.

If UCLA is going to hang with Gonzaga, they will need more than defense. Their offense will need to step up in a major way.

The 51 points they scored in the Elite Eight was enough to beat Michigan. But scoring 51 points against Gonzaga may not be enough to stay within 30 of Mark Few’s top-seeded Bulldogs.

That average margin is the reason that the point spread for this contest is the biggest in the last 25 years of Final Four action. Stopping the combination of Jalen Suggs, Drew Timme, and Corey Kispert has been too tall a task for any opponent of the Zags this season, let alone all of the complementary players that go along with them.

If there is one area where UCLA could get the better of Gonzaga, it is turnovers. Any team, even the mighty Gonzaga Bulldogs, can have a game with a lot of turnovers if they are not careful. But as long as Gonzaga stays focused, they should be able to avoid that trap and play to their usual standard.

Who will win the UCLA vs Gonzaga game:

UCLA has had an incredible run just to reach the Final Four after starting the tournament in the First Four. And while the duo of Johnny Juzang and Jaime Jaquez has been formidable, it hasn’t gone up against anything like the Zags just yet. The pro-level talent of Mark Few’s team should make a statement in this game, tearing the UCLA defense to shreds en route to a national championship game appearance.