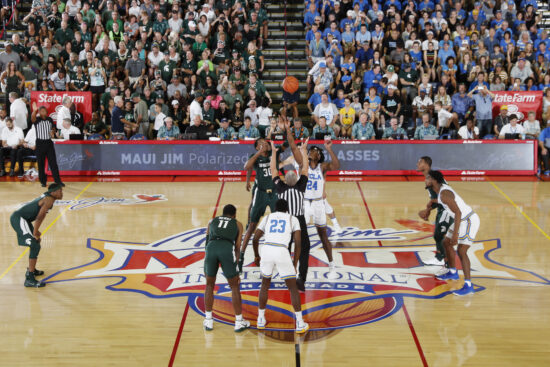 The teams met last season in the Maui Invitational, with Michigan State coming away with a 75-62 victory. Neither team had the regular season its fan base would want, but that can all change with a couple of wins in March.

The winner of UCLA and Michigan State will advance in the East Region to take on BYU. The traditional college basketball fan is going to think this is a Sweet Sixteen or Elite 8 matchup with names like Michigan State and UCLA squaring off, but that is not the case this year as both teams were just lucky to make the tournament.

The Bruins really struggled down the stretch losing four straight games. The Bruins cost themselves a shot at a regular-season Pac-12 title. UCLA also slid down the seed line as some bracketologist had them as high as a seven seed at one time.

UCLA is really strong offensively, coming in at 26th in offensive efficiency. They struggle on defense where they are only 86th. Don’t expect Mick Cronin’s team to get in a fast-paced game as they are ranked 332nd in tempo.

Johnny Juzang is the leading scorer for the Bruins, with 14.0 points per game. He is one of the nation’s best foul shooters at 91.5% but doesn’t penetrate enough to get to the line.

Kenpom has UCLA as the 44th ranked team in the nation. They are 47th in the country, shooting 36.7% from three-point range.

Three weeks ago, it was looking like Michigan State, and Tom Izzo’s streak of 22 straight NCAA Tournaments was surely going to end. Then the Spartans knocked off three top 10 teams in Michigan, Illinois, and Ohio State.

Michigan State is the opposite of UCLA. They are decent defensively but really struggle on offense. The defense ranks 32nd in efficiency, but the offense is only ranked 98th.

Kenpom has Michigan State as the 56th ranked team in the nation. The Spartans are 330th in the nation in forcing turnovers.

Who will win the UCLA vs Michigan State game:

The Spartans really found another level down the stretch. Two of Michigan State’s best three performances all year came in the last two weeks of the season.

On the other hand, UCLA’s performance against Oregon was on their worst of the season. I think the momentum is on Michigan State’s side as they defeat UCLA and advance to play BYU on Saturday.