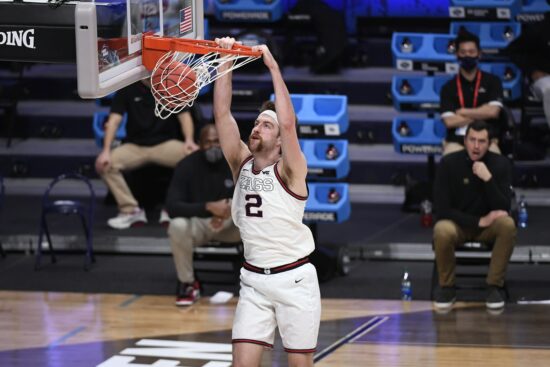 The USC Trojans and Gonzaga Bulldogs square off in the Elite Eight, with the West region championship on the line. In addition to a spot in the Final Four, Gonzaga’s bid for a perfect season is on the line. Here, they face a red-hot USC team that has won convincingly over every team in its path over the course of the NCAA Tournament.

Through their first three games of this NCAA Tournament, the USC Trojans have played perhaps the best offensive basketball outside of Gonzaga in this tournament. The Trojans have scored just under 80 points per game in their three double-digit wins over Drake, Kansas, and Oregon to get to the Elite Eight.

Against Gonzaga, the Trojans will need to be at their best offensively just to keep up with the powerful Bulldogs’ offense. Fortunately, the Trojans have bigs in Evan and Isaiah Mobley, who may be able to give the Zags’ frontcourt some trouble.

Can Gonzaga Be Stopped?

Gonzaga has continued to play as close to perfect basketball as there is at the collegiate level during March Madness. Mark Few’s Bulldogs have averaged 89 points per game during the tournament, winning each of their first three games during this event by 16 points or more.

Over their last two games, Gonzaga has been led by Drew Timme. The paint presence of Timme has been a massive boost to Gonzaga’s attempt at a perfect season. He has averaged 26 points per game over Gonzaga’s last two games. And against Evan Mobley on the inside in the Elite Eight, Timme will need to be solid both offensively and defensively once again.

This game is a great test for Timme and the Bulldogs. Their program has been regularly criticized for failing to beat teams that possess a physical interior presence. If they can do just that against USC, it would be a huge boost heading into a Final Four against potential opponents like Michigan and Baylor.

Who will win the USC vs Gonzaga game:

Right now, there are just too many weapons on the Bulldogs for USC to deal with. Outside of Timme, the Bulldogs have Corey Kispert shooting 60% from three-point range in the tournament. And with a lottery pick in Jalen Suggs running the show, Gonzaga isn’t going to be slowed down by either Mobley from USC. Expect a double-digit win for Gonzaga and a trip to the Final Four for the top seed out West.