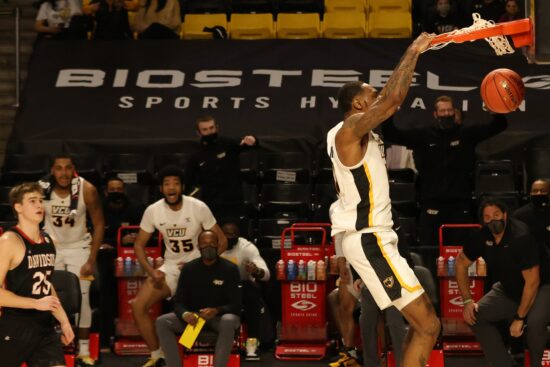 The final game of the First Round of the NCAA Tournament will feature the (7) Oregon Ducks taking on the (10) VCU Rams. These teams were placed in the West Region, which is headlined by top-seeded Gonzaga.

VCU posted a 19-7 record during the regular season and suffered a loss to St. Bonaventure in the Atlantic-10 Championship Game. Oregon was knocked out by Oregon State in the Pac-12 semifinals but finished the year with a record of 20-6.

VCU Must Knock Down Shots

The VCU Rams are shooting just 33 percent from the three-point line this season, and they will have to shoot it well to beat the Ducks. The Rams are great at attacking the basket, but they need to stretch the Oregon defense.

Nah’Shon Hyland leads the way for VCU with 19.5 points per game, and Vince Williams Jr. has chipped in with 10.6 points per game. These are the only two Rams players scoring in double-figures, and this team continues to search for a third scoring option.

The Rams are holding teams to just 65 points per game, but that defense has been shaky against some top teams.

The Oregon Ducks have a star in Eugene Omuriyi, who is leading this team with 16.7 points per game. Oregon also has four other players scoring at least 10 points per game, including Pac-12 Player of the Year, Chris Duarte.

Oregon is a much better three-point shooting team than VCU, making nearly 38 percent of their shots from behind the arc. The Ducks have more size in this matchup as well, and that could play a role.

The Ducks won’t mind playing this game at a much faster pace as they should have the depth to wear down VCU.

Who will win the VCU vs Oregon game:

Don’t expect an extremely high-scoring affair on Saturday night, as both teams have been solid on the defensive end of the floor. Oregon has been slightly better on offense, and that will likely be the difference in this game.

Both teams are evenly matched, but Oregon has faced a tougher schedule in the Pac-12. The Ducks will make the big plays late, and they will advance to Monday’s game.

The Oregon Ducks will advance to the Round of 32 with a win over VCU, but it will be a one-possession affair. A close and exciting match is expected, so it makes sense to go with the VCU Rams to keep it within the five points.