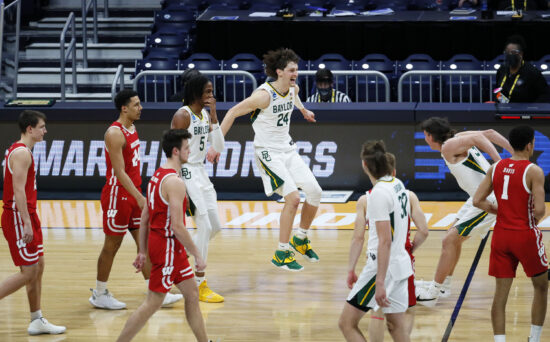 There are just 16 teams remaining in the 2021 NCAA Tournament, but by next week the Final Four field will be set. There have already been a number of shocking upsets in the tournament, but some of the top teams in the field still remain as well.

The (5) Villanova Wildcats will take on the (1) Baylor Bears on Saturday evening in a Sweet 16 matchup in the South Region. Both teams have looked sharp so far in the NCAA Tournament, and this could be one of the best games of the weekend.

The victor of the Arkansas-Oral Roberts game awaits the winner of this matchup in the Elite Eight.

The Villanova Wildcats entered this tournament without their starting point guard, Collin Gillespie, but the team has not folded. Playing without Gillespie has affected their offense a bit, but the Wildcats have been making up for the loss by playing terrific defense.
Villanova has allowed just 62 points per game during this run, but they will be facing an explosive offensive team on Saturday. The Wildcats will need to score points of their own and look for Jeremiah Robinson-Earl to lead the way.

Robinson-Earl leads the team with 16 points per game, but the Wildcats have shot it well throughout the NCAA Tournament.

The Baylor Bears have a roster that is loaded with talent, and most of their stars are in the backcourt. Jared Butler leads the team with 16.9 points per game, and he is an All-American selection this season.

Baylor is scoring nearly 84 points per game this season, and they have been nearly just as explosive in the NCAA Tournament. If the Bears are making shots, they have the ability to completely overwhelm their opponents.

Baylor can also defend, allowing less than 66 points per game this season. There is a reason that Baylor is one of the top title-betting favorites this season.

Who will win the Villanova vs Baylor game:

The Villanova Wildcats have proven that they know how to win games in the NCAA Tournament, but they are a bit overmatched in this game. Baylor has been extremely impressive and performing at a consistently high level all season long, and this is a team that is loaded with talent.

This should be a close game for the first 30 minutes, but Baylor just simply has too many weapons. The Bears will wear down the Wildcats in the second half, and they will pull away late for a comfortable win.