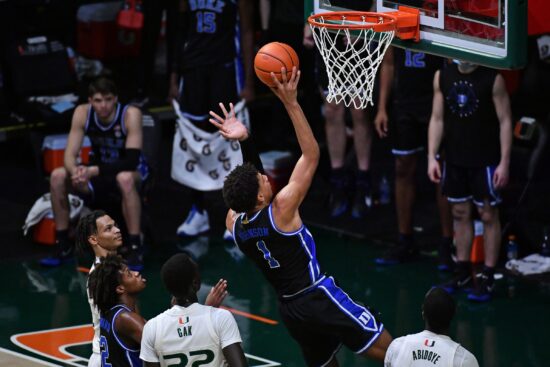 The timing seems to be right for the Duke Blue Devils to get the win over the #8 Virginia Cavaliers on Saturday at Cameron Indoor Stadium. Virginia is reeling a bit after getting absolutely dominated by a really good Florida State team, 81-60 on Monday. Now the Cavaliers play a second straight road game and against a Duke squad that has quietly put together back-to-back dominant wins.

Virginia Turns to Defense Per Usual

It was an uncharacteristic outing from the Cavaliers defense in the loss to Florida State, as Virginia hadn’t even allowed 70 points all season let alone 80+. FSU does have the leading scoring offense in the ACC, but there should have been a little resistance as the Seminoles shot 29-58 (50%) from the floor and 13-24 (54%) from three point range.

The big question becomes if the Florida State loss was an anomaly or if the Seminoles have cracked the code about getting to the Cavaliers? Virginia had won 11 of 12 games prior, including 60-48 against North Carolina, who Duke beat 91-87 two weeks ago. Virginia still leads the ACC in allowing just 59.9 ppg, which is also 6th best in the country, but they don’t seem as dominant now.

It’s going to be another test for Tony Bennett’s squad. Duke isn’t too far behind FSU, ranking 3rd in the ACC in scoring 75.3 ppg. The Blue Devils offense is clicking lately too, putting up 84+ points in 3 of the last 4. Sam Huff, UVA’s 2nd leading scorer, is going to need a bigger game than the 4 points and 2 rebounds he had vs. Florida State.

It’s very possible that the Blue Devils face an angry Virginia squad in this matchup, but if Florida State can shoot that well against the Cavaliers on their own court there’s no reason to believe Duke can’t repeat that feat. At 7-8 Duke is just so inconsistent this year however.

Duke has put together a couple solid games after losses to North Carolina and Notre Dame. Was that because the Blue Devils are playing well though, or because their opponents were NC State and Wake Forest? Both wins were by 15+ points and on the road so there’s some optimism there. Duke is just 6-4 at home on the year though.

Matthew Hurt has been his usual great self lately, tallying 24 in the win over NC State and 22 against Wake Forest on Wednesday night. Hurt is second in the ACC in scoring (18.1), and another big game is imperative to get to the Virginia defense. Duke hasn’t gotten very consistent scoring outside of Hurt, especially with Jalen Johnson (11.2 ppg) opting out of the rest of the season.

Who will win the Virginia vs Duke game:

The Cavaliers were exposed last time out against Florida State, and this meeting may very well play out in much of the same manner. Duke is 3-1 at home in the last four in this series, but each one of those games were decided by 4 points or less.