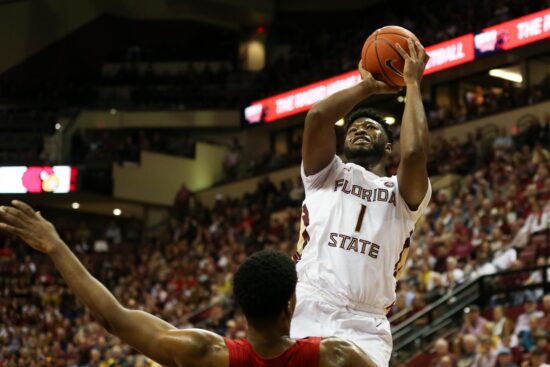 The Florida State Seminoles are a surprising -1.5 favorite when they host the #9 Virginia Cavaliers on Monday. This game is your classic offense vs. defense matchup, as FSU leads the ACC in scoring at 79.1 ppg while the Cavaliers are the top defenders in the conference, allowing only 58.8 ppg.

The Cavaliers defense was on full display on Saturday, beating North Carolina 60-48 as -7 point home favorites. The Tar Heels were averaging 72.7 ppg, but were held to a season low in the loss. UNC hit just 2 of 16 shots from three point range as Virginia has climbed to #4 in the country in scoring defense.

The Cavaliers have another firm test on Monday against a Seminoles team that has scored 80+ in three of the last floor including 92 points in an OT win over Wake Forest on Saturday. The teams have split the last 8 games, which is nothing new as the series is tied 26-26 over their last 52 meetings. Monday’s tilt should be another close one.

Of course the Cavaliers are more than just defense. Sam Hauser averages 15 ppg, and had 23 to lead a tough win over Pittsburgh 9 days ago. 7’1” Jay Huff had 18 points and 12 rebounds to lead the win over UNC, and was part of an inside presence that held North Carolina’s pair of 6’10” starters (Garrison Brooks and Armando Bacot) to a combined 12 points.

FSU has climbed to #17 in the polls, due largely in part to their 10-1 record at the Donald L. Tucker Civic Center. Florida State’s lone loss at home was an 86-74 slip up vs. Central Florida as -15 point favorites. The Seminoles on their own floor in conference play is a different animal though, as they’ve won their last 23 ACC home games.

Make no mistake, Saturday’s 92-85 win over Wake Forest in OT was tougher than it had to be as FSU was a 13 point favorite against the 3rd worst team in the conference. The Demon Deacons battled back in the 2nd half, but that could be expected as it was FSU’s first game in two weeks due to COVID shutdowns.

FSU got 24 points from Raiquan Gray in the win over Wake Forest, but otherwise it was another balanced scoring effort for the Seminoles. Five players had at least 12 points on Saturday, and five players average 9+ which will be key vs. the Virginia defense.

Who will win the Virginia vs Florida State game:

It’s hard to go against Florida State at home, but Virginia’s defense is absolutely suffocating everybody they play.