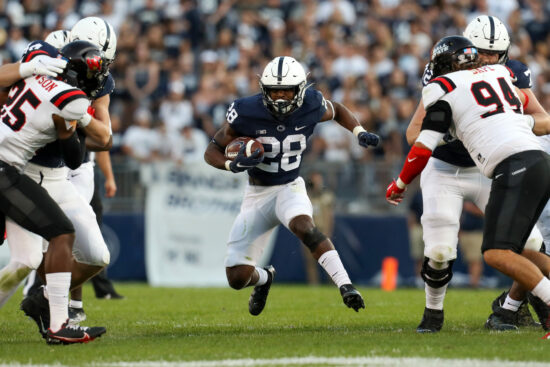 One of the best games of the weekend will be Saturday night as the Auburn Tigers travel to take on the Penn State Nittany Lions. Both teams should stay inside the Top 25 the rest of this year, and this game is a great barometer for their success this season. Auburn has outscored their opponents 122-10 this season, while Penn State has averaged 30 points a game.

Penn State has played the tougher schedule, however, with a win over #16 Wisconsin to start their season. Both of these schools have high hopes for their season, and this is a game that could really give them momentum to build on as we get to the conference schedules. Look for this game to be a good one on Saturday night and be one of the best games of the weekend.

Auburn has really started this season out hot. A lot of their success can be attributed to the quarterback Bo Nix. Nix has thrown for 383 yards and five touchdowns while managing the game very well. They have also fun the ball for over 300 yards per game in the first two games of the season.

Penn State Will Try to Notch Another Big Win

Penn State has not put up nearly the gaudy offensive numbers that Auburn has, but their opponents have been quite a bit tougher thus far. Sean Clifford has been under center this year and has thrown for 477 yards and two touchdowns. He hasn’t been spectacular, but he’s done enough to win games. The defense for Penn State has been really good so far this year, including allowing just 10 points to Wisconsin.

Who will win the Auburn Tigers vs. Penn State Nittany Lions game:

Penn State is favored this week by five points. The moneyline is set at -200 for Penn State and +170 for Auburn. The over/under is currently at 53 points for the game. There is value to be had in all of these plays. I really like the moneyline for Auburn here, but I think it will be a very close contest.

I think that Penn State will come away with the win, but I think it will be a close one throughout. I’ll take Penn State.

Penn State looks to be in the driver’s seat, but Auburn can’t be counted out. Look for Penn State to win a close one.