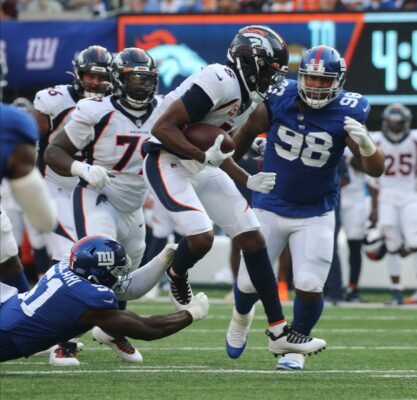 Well, the Jacksonville Jaguars got that out of the way. There’s going to be some growing pains with #1 pick Trevor Lawrence starting from day one and Urban Meyer trying to transition to the NFL but the 37-21 loss to the lowly Texans in week 1 is still kind of disappointing. It’s on to the next one though, and things don’t get any easier with the Denver Broncos coming to Duval County off an impressive 27-13 win at the Giants. Denver is a 6-point favorite here.

Sure it was only one week, but Denver fans have to like what they saw from their team in the two TD win over the Giants. The big story is Teddy Bridgewater taking command of the offense in his first start with the team, going 28/36 for 264 yards and 2 TD.

There’s a whole lot more to talk about from the Broncos offense though, including what appears to be a two-headed monster in the backfield between Melvin Gordon III (11 carries, 101 yards) and rookie Javonte Williams (14 carries, 45 yards). Three wide receivers had a 20+ yard catch for Denver last week too, showing what can happen when both aspects of your offense are working.

Von Miller also made a big splash for the Denver defense notching two sacks after missing the entire 2020 season with an ankle injury. Vic Fangio has to be licking his chops drawing up schemes against the Jaguars’ rookie QB Lawrence.

What to Expect From Lawrence in Game 2

Trevor Lawrence suffered the first regular-season loss he can ever remember last week, but his performance had the ups and downs that you’d expect from a guy seeing his first-ever NFL regular-season action. Lawrence had 332 yards and 3 TD, but he also threw 3 INTs.

Overall the Jaguars were very sloppy in what was also Meyer’s NFL coaching debut. They committed six penalties and had four dropped passes in the first half alone, putting themselves in a 27-7 hole going into the break. Being less than prepared in Meyer’s first NFL action can’t be an excuse though, as Houston’s David Culley was in his first game as a head coach on any level.

One thing is for certain, the Jaguars’ defense needs to be much better on Sunday against a Broncos offense that impressed in week 1. Jacksonville gave up 291 yards passing to Tyrod Taylor in just his second start since 2019 and allowed another 160 to the Texans on the ground.

Bounce back game from Jacksonville or is this already the beginning of the end of the Meyer experiment in the NFL? There are already rumors that Meyer will leave Jacksonville for the newly opened USC job and the last thing this team needs is distractions. 6 points doesn’t look like nearly enough for the Jags to cover.