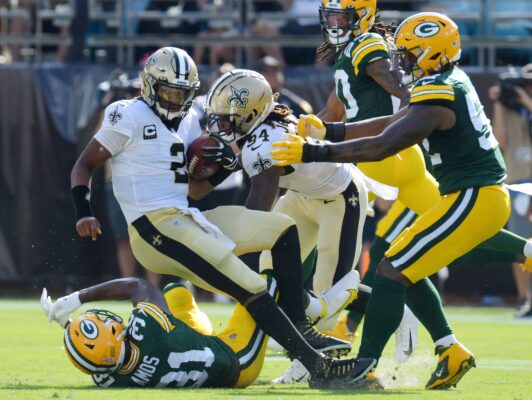 It’s probably a bit too early for the r-e-l-a-x talk, but Aaron Rodgers has plenty of people zoned in on what he will do in week two following the Green Bay Packers’ 38-3 loss to New Orleans last week. At the very least, what the Packers looking so horrible last week did was give the Detroit Lions hope, as they haven’t won in this series since 2018. However, the Lions didn’t tear things up in a 41-33 home loss to the 49ers last week.

Can Goff Get Started Earlier?

There are mixed reviews about Jared Goff’s Q.B. performance in the first game P.S. (post-Stafford). Goff did throw for 338 and 3 T.D., but most of his damage came after the 49ers took their foot off the gas with a 38-10 3rd quarter lead. Goff led three late T.D. drives, but was that because he was settled in or because San Francisco had gone to the preventing?

The good news is Goff will get to face a Packers defense that was not very good in week 1. Jameis Winston only threw for 148 yards against Green Bay last week, but he tossed 5 T.D.s, and the Saints ran for another 171 yards on the ground. Jamaal Williams had 9 carries for 54 yards for the Lions last week, and now he gets the chance to carve up his former team on Monday Night Football

When talking about the Packers’ lack of defense last week, you also have to take into account that Detroit wasn’t very good on that side of the ball either. Jimmy Garoppolo had a 300-yard passing day, and Elijah Mitchell came in to run for 100+ yards even after the 49ers starting R.B. Raheem Mostert was injured.

Aaron Rodgers didn’t play well in the season opener, but even if he would have had 2, 3, or 4 T.D. passes it wouldn’t have been enough the way the Packers’ defense allowed the Saints to run up and down the field. Winston had full command of the New Orleans offense even though it was his first start ever with the team.

Maybe we give Green Bay a pass due to all the unusual circumstances surrounding the season opener – mainly that it was played at essentially a neutral site in Jacksonville after Hurricane Ida ripped through New Orleans. The Packers will get a boost playing back at Lambeau in front of a capacity crowd of 81,000+ for the first time since the 2019 season. Green Bay had only 7,700 in attendance for last year’s NFC Championship Game loss due to COVID.

Green Bay’s offense laid an egg last week, but it’s important to remember that New Orleans had a top 5 defense last year in yards, rush yards, pass yards, and points allowed. Detroit, on the other hand, did not, ranking dead last in the NFL in yards allowed (419.8) and points given up (32.4). It’s looking like a bounce-back night for Rodgers and the G.B. offense.

Green Bay’s offense will get right here, and it’s nearly inevitable. The thing is, this Packers defense may be very, very bad in 2021. They replaced Mike Pettine, which had to be done after the playoff meltdowns, but Joe Barry isn’t considered an upgrade by many people. Detroit has some weapons in D’Andre Swift and TJ Hockenson, and even in their horrible years have played the Packers pretty well.