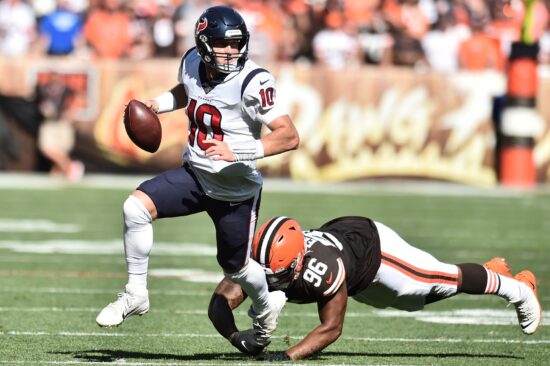 In this Thursday Night Football matchup, one team will continue to outperform the expectations set for them this season.

The theme for this season has been defense for the Carolina Panthers through their first two games of the season. Carolina has allowed just 21 points through two games during the 2021 campaign, allowing 14 points to the New York Jets before holding the New Orleans Saints to just seven points.

Against a Houston Texans team facing uncertainty at quarterback, the Panthers are in a great position to continue their defensive dominance.

Offensively, the Panthers have benefited from the return of Christian McCaffrey this season. McCaffrey has racked up over 300 total yards through the first two games of this season, providing Sam Darnold with a reliable weapon out of the backfield that he did not have in New York.

Carolina is averaging 27.5 points per game so far this season, which has been more than enough to win them games based on the play of their defense.

With Deshaun Watson being unavailable for the Houston Texans, Tyrod Taylor was expected to be the primary option at the quarterback position. But Taylor suffered a hamstring injury in the Texans’ Week 2 loss to the Cleveland Browns, leaving his status for Thursday Night Football in doubt. If Taylor is unable to go for the Texans, they would likely be relegated to using Davis Mills as their signal-caller.

Technically speaking, the Houston Texans are currently in first place in the AFC South with a 1-1 record. They hold the tiebreaker over the 1-1 Tennessee Titans and sit above the 0-2 Indianapolis Colts and Jacksonville Jaguars. Given the expectation that the Texans would be one of the worst teams in the league this season, moderate success after two weeks has to feel like a win for the franchise.

The Carolina Panthers have been the better of these two teams so far this NFL season, winning both of their games without much stress involved. But the Houston Texans have covered the spread in both of their games and have been much more competitive than they were expected to be coming into the year.

Houston will pick up their third straight win against the spread when they hold Sam Darnold and the Panthers somewhat in check, although I still like the Panthers to emerge with the win on the night.