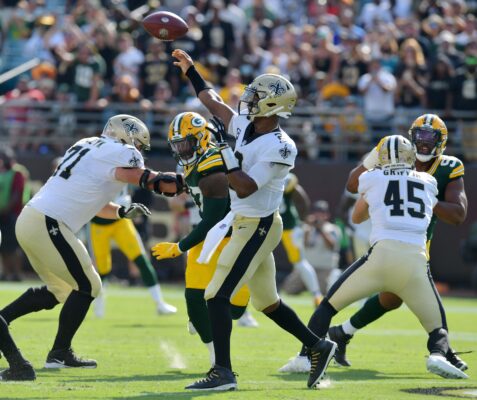 Both the New Orleans Saints and the Carolina Panthers couldn’t be happier with their week 1 results. New Orleans moved on from the Drew Brees era in huge fashion with a 38-3 win over Green Bay last week. The Panthers welcomed Sam Darnold as their new QB of the future, and he instantly helped guide them to a victory over his old team the Jets, 19-14. Which team will keep the mojo going?

Winston Has a Grasp of the Offense

New Orleans was clicking on both sides of the ball last week, but nobody was more impressive than QB Jameis Winston. It’s never easy stepping in for a legend like Brees, but Winston paid no mind and tossed 5 TDs against the Green Bay defense. Winston didn’t need a ton of yards to have his success (148) but he was an efficient 14 of 20 passing and also more importantly didn’t throw an INT.

Winston also benefited from a very solid running game that also looks deep. Alvin Kamara had 83 yards and Tony Jones, Jr. 50 as part of 171 yards rushing for the Saints. Winston added 37 yards rushing and Sean Payton really didn’t use ultra back Taysom Hill that much, giving the Panthers that much more to game plan against.

Dennis Allen is ready to put a strategy together against Darnold after his Saints defense picked off Aaron Rodgers twice last week. Green Bay usually has a very good running game, but they managed just 43 yards on 15 carries last week. The Packers also don’t have a back like Carolina’s Christian McCaffrey either.

Sam Darnold needed to look no further than across to the other sideline to realize how great his opportunity is in Cleveland. Weapons were few and far between for Darnold in his three seasons with the Jets, but now the former USC QB has three top-tier receivers as well as possibly the best back in the game in McCaffrey.

The Saints played good run defense last week, but McCaffrey also came back with a vengeance with 98 yards on the ground and another 89 through the air. McCaffrey is a good safety blanket for Darnold, especially because defenses are stretched trying to cover the trio of Robbie Anderson, DJ Moore, and rookie Terrace Marshall, Jr. who combined for 18 catches and 215 yards in week one.

The New Orleans secondary says bring it on, as they held Davante Adams to just 5 catches and 56 yards last week. The big question for this game is the Carolina defense, who had the luxury of going up against the Jets’ rookie QB Zach Wilson in the opener, sacking him six times.

Carolina did look very good last week and Darnold is only going to get better with more time in Matt Rhule and Joe Brady’s system. The Saints looked great last week even with the adversity of losing a home game and having to play in Jacksonville due to Hurricane Ida. No reason to think that doesn’t continue.