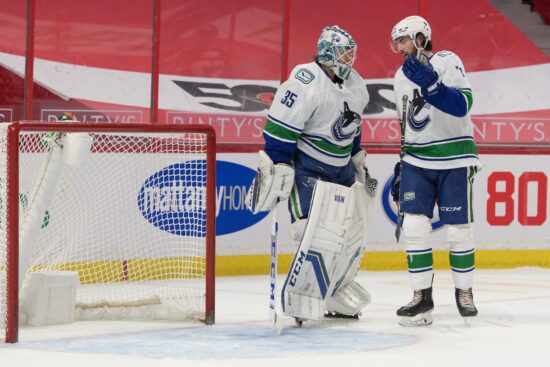 Toronto Maple Leafs have achieved their goal of qualifying for the Stanley Cup Playoffs, and it is very likely they will finish the regular season in the #1 place in the North. Vancouver Canucks are 10 points behind the closest playoff spot, but this team has played at least three games fewer than all the teams competing for that place. This fact makes the Nucks’ playoff dream still pretty much alive.

Canucks Going for the Playoffs

The Nucks are at the very bottom of the table. The reason is not that they’ve been dreadful this season. Instead, they played fewer games than other teams in the North Division.

They have a better win percentage than Calgary and Ottawa, both of which are ranked higher than them. However, it’s Montreal they should be worried about. The Canadiens are currently in the #4 place, the one the Canucks have set their eyes on.

Montreal currently has 10 points more than Vancouver, but the Canadiens have played five games more. What this means is that there’s a good chance for the Canucks to get on level points with them.

The trouble is that time’s running out for them. There are only 13 games left for this team to play. The good news is that four of those are against the Calgary Flames, who are one of the worst teams in the NHL.

The Canucks also have to play against the Oilers, who will probably secure a playoff spot by then. Basically, the same goes for the Jets. Then, there are also the two games against the North Division leaders, the Maple Leafs.

Injury Problems on Both Sides

Getting to the playoffs does not seem impossible for Vancouver, but the problem is that this team has some serious injury problems. Their first-choice goalie Thatcher Demko is out, same as skaters Jay Beagle, Zack MacEwen, Antoine Roussel, and Elias Pettersson.

Some of these guys have been out for a while, which explains why the Canucks haven’t been performing as many expected them. For instance, they lost three games to the Ottawa Senators within the last ten days.

The good news for them is that they’re now facing the Leafs, a team that’s also struggling with injuries. In tonight’s game, Toronto will be without goaltender Frederik Andersen, as well as defenseman Zach Bogosian.

On top of that, the Leafs will miss Zach Hyman, one of their best forwards, with 33 points (15 goals and 18 assists) this season.

Who wins the Canucks vs Maple Leafs game tonight:

No one should be surprised if Vancouver gets a win tonight. The Canucks seem to love playing against the Leafs – they beat them in their previous four games.

On top of that, the Canucks need points; the Leafs do not. The only thing going against them is the fact that they’re without a number of their key men. It’s not going to be easy, but the Nucks should be able to get the much-needed points.