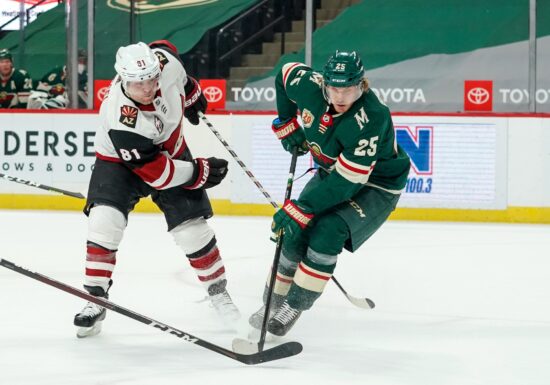 The Minnesota Wild are seeing an advantage when West Coast teams have to visit the Twin Cities. The Wild have won 7 straight in St. Paul, are 9-3 at Xcel Energy Center this year, and play an Arizona Coyotes team that has lost three in a row. There’s a reason why Arizona is a +175 underdog on Tuesday (MIN -200).

Coyotes Not Liking the Visit

Tuesday’s game will actually mark the third straight game between Arizona and Minnesota. It hasn’t gone great for the Coyotes, losing 0-4 on Friday and 1-4 on Sunday. That’s a subpar performance on both ends of the ice for an Arizona team that ranks last in shots attempted, and 4th worst in shots allowed.

Any bright spots for the Coyotes here? Arizona is just 5-5-1 on the road this season, but also traded a couple 5-2 games with Minnesota in a series split in the desert back on March 5th and 6th. The Coyotes are also 2-3-1 over the last six, but those have all come against the Wild and Avalanche, two of the top three teams in the West.

Both of Arizona’s goaltenders have had their struggles so far in the series vs. Minnesota. Adin Hill gave up 3 goals on 31 shots in Friday’s loss while Antti Raanta allowed 3 on 34 shots on Sunday. Rick Tocchet’s team is trying to fight through an upper-body injury to regular goaltender Darcy Kuemper that has cost him the last three games.

Is there somewhat of an advantage for Arizona playing their third straight in the Twin Cities, having had the last five nights to get acclimated to their surroundings? That would make the Coyotes worth a play at +175, but they’ve just shown absolutely no offense with two goals the last three games.

Minnesota on the other hand is clicking, having hung a 4-spot on the board in three straight including a 4-3 win to Vegas on March 10th. The Wild have a lot of people clicking at the right time, led by Mats Zuccarello dishing out five helpers in the last three games. Kirill Kaprizov had a hat trick in Friday’s win over Arizona, and Kevin Fiala has two goals in the last four games vs the Coyotes.

For as good as their offense has been, Minnesota goaltender Kaapo Kahkonen is the reason the Wild feel they have a legit shot at winning the West. The second-year player has allowed 2 goals or less in six of his last eight appearances.

Who wins the Coyotes vs Wild game tonight:

Minnesota is just playing great on both ends of the ice right now. Arizona being without their top goaltender doesn’t help, and the Coyotes wrapping up a road trip following this game might make them a bit complacent.