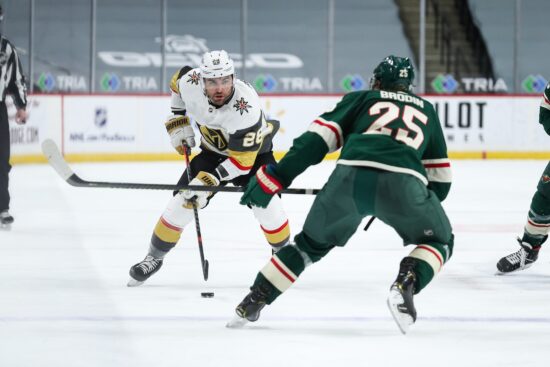 The Vegas Golden Knights are poised for greatness this season. Peter DeBoer’s team sits atop the West with 33 points and have gone 7-3 over their last 10. The Minnesota Wild don’t care about the accolades though, as they powered their way to a 2-0 win on Monday and try to run their home winning streak to five straight. Vegas is just -115 in this one (Minnesota -105).

There’s not a whole lot more that Marc-Andre Fleury could have done in Monday’s game, giving up just a Kevin Fiala score at 10:51 in the 1st but his team never getting an equalizer. The icing on the cake came for the Wild on an empty-netter at 19:54, but that’s not on Fleury.

Vegas has a top 5 offense, so Minnesota containing them last time out seems like an anomaly instead of a trend. The Golden Knights had put up 4+ in the four games prior to Monday’s loss, including 5-1 and 5-4 home wins over the Wild to start off March. Minnesota has a great chance to even up the season series on Wednesday, especially at home where they are a respectable 6-3 on the year.

Marc-Andre Fleury is the man in net for Vegas as Robin Lehner nurses an upper body injury. The veteran has been great, allowing a total of two goals in his last three starts. Minnesota was very lucky to get the win on Monday, especially while taking just 21 shots. Can the Wild repeat those good fortunes though?

It wouldn’t take a genius to expect a Vegas bounce back here. The Golden Knights were in a tough spot on Monday playing their first game of the season East of the Mississippi. Then again, who is to say Vegas is guaranteed a bounce back, as the Golden Knights play their 7th road game in the last 9 overall?

Minnesota is a hard team to gauge at home, because they never get to play there thanks to the relocating for the 2021 campaign. The Wild have played 10 of their last 13 on the road, and it’s implied that they are at a huge disadvantage having to travel to the West Coast so much this year. The Wild are hanging tough at 3rd in the West though, and that road disadvantage is just as reversed when West Coast teams have to travel East.

Kaapo Kahkonen may be a rising star in this league in net for the Wild. The 2nd year player has allowed 2 goals or less in 6 of the last 7, which includes Monday’s shutout of a Vegas team averaging 3.3 goals/game.

Who wins the Golden Knights vs Wild game tonight:

A lot of people will be pouncing on the Golden Knights here, and that’s great value at -115 for a first place. Don’t underestimate the toll it’s taking for West Coast teams to visit St. Paul however. Vegas comes out flat again, but also get great goaltending one more time.