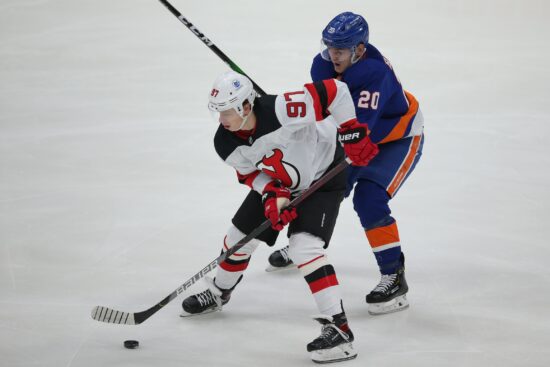 The Islanders are playing their best hockey at the start of the season at 3-1 so far. Their last win came at home against the Devils for the first game of this series in an uncanny lopsided affair. The Islanders opened up with a 2-0 lead and never looked back from there never relinquishing a their lead and adding another 2 goals in the third to route the Devils 4-1.

Contributing to these goals was the fact that the Islanders had a crazy faceoff advantage with 38-22 in their favor and only had one penalty called against them the entire game. We will see if this one matchup was a fluke however when they meet again on Sunday.

Islanders With a Solid Defense

(If you don’t count what I’m calling the fluke second game against the Rangers). In three out of four games the Islanders have only allowed one goal. Still even if you count their 5-0 thrashing they took at the hands of the Rangers, they would have only given up six in four games! This is because teams are averaging less than 30 shot attempts a game on the Islanders while Semyon Varlomov in goal has recorded two shutouts and a crazy 98 percent save percentage.

Leading the offensive charge however has been Mathew Barzal the center. Barzal has 10 shots on just two goals which is the real stat line that represents the Islanders as a whole. This team is averaging less than 30 shots on goal a game yet every game they have played for the most part they have seemed like the more dominant team because of their defense despite not even scoring more than one goal just twice all season.

Devils With a ‘Less-Than Solid Defense’

Unlike the Islanders, New Jersey has one of the most porous defenses in all of hockey. They are giving up almost 40 shots a game yet somehow are only averaging a little over 2 goals a game given up as well. The other trouble is their offense just does not have a spark to it to support this less than perfect defense.

Their leading scorer Miles Wood only has 3 goals on 13 shots, but I’m looking more of a spark from the New Jersey power play. The dismal efficiency has been the real killer with just one  goal on a 9.1 percent conversion rate which is something they desperately need to improve upon considering their shots are already below 30 on average when attacking the net.

Who wins NHL tonight between Islanders vs Devils:

Give me the Islanders here. Varlamov is playing lights out and facing a team that is struggling to find the back of the net as it is. However the Islanders also showed that when they lose games they do so in blowout fashion so it will be interesting to see if one goal slips by this stout defense will their offense be able to break out of their trend of being shutout. These teams are even on paper, but the actual talent level is blatantly clear on the ice.