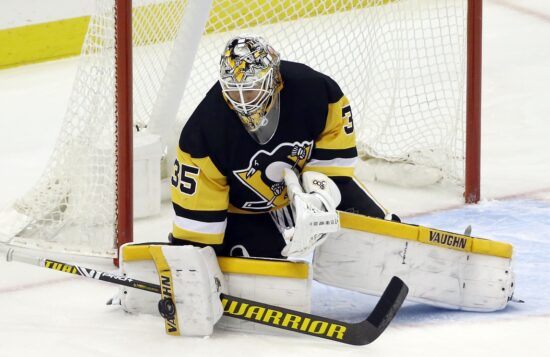 As predicted, the Penguins and Rangers first game was a high-scoring affair. Six combined goals including the game winning one in a shootout by Pittsburgh gave them the 4-3 win.

Five goals combined were scored before the third period even started with the Rangers up 3-2 despite the Penguins out-dueling them 35-18 in faceoffs and having more penalties as well.

For this next contest, I will expect more of the same type of game considering both of these teams average close to scoring and letting in three goals a game.

Rangers Struggling to Find Their Stride

At 1-2-1 on the season New York hasn’t gotten off to the ideal start. They’ve given up four goals in all of their losses due to their ineffective powerplay kill. Six powerplay goals given up combined with 42 PIM for their team doesn’t bode well for the types of close games these team finds themselves in so far this year.

Artemi Panarin has been the best option to counteract the Rangers defensive woes however. The left wing is leading New York in both points and goals despite only converting 12 of his 2 shots on even strength. This has been the Rangers offense in a nutshell; lots of shots on net but nothing to show for it on the other end as they nearly have 35 a game fired a the goalie but 2.83 average only go in. The Rangers must either find ways to be more efficient on offense or tighten up their defense somewhat to at least block some shots and give their netminder a chance to win them some games.

Can the Penguins Keep This Pace Up?

The Penguins are no strangers to scoring goals due to their impressive lineups they’ve created in the past ten years, but can they keep up winning these high-scoring games? Pittsburgh’s last three games have at least gone into overtime while two of them have ended in a shootout. Shootouts never determine which team is actually the better one, just who has a better goalie in the end when it’s all said and done. Knowing this, how can we tell how good this team really is?

Well for one we know that they will at least score enough to keep them in games at least. Naturally, Sydney Crosby is leading the team in both points and goals but everyone except five players on the Penguins roster has recorded at least one point excluding the goalies of course. This offense is a well-oiled machine so do I know if they can keep it up? No, but their defense should be easier to fix than an offense already firing on all cylinders.

Who wins NHL tonight between Rangers vs Penguins:

I just can’t go against the Penguins offense in this one. They are too strong to score with the best of opponents and the same can’t be said for the Rangers. I realize they are two shootouts and an overtime random goal from having three losses instead of three wins, but also it is sometimes better to be lucky than good especially in a random sport like hockey.