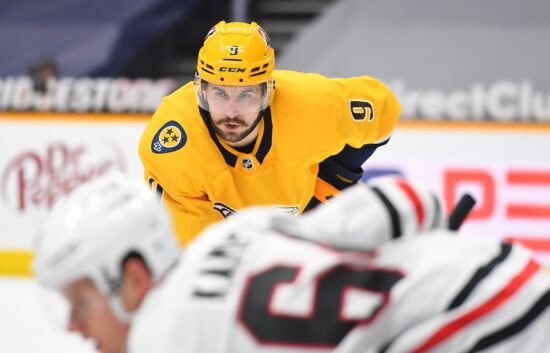 These teams find their seasons going in opposite directions as they clash in Nashville Wednesday night. The first matchup of the series had the Predators taking this one in overtime 3-2 by tying it up in the third period then winning in OT

Beforehand this game the Predators had a rough go facing the Carolina Hurricanes at home then facing the defending Western Conference champion Dallas Stars on the losing back-to-back games. But now they have appeared to right the ship by getting the Blackhawks for two games.

On the other hand, the Blackhawks let this one slip away despite finally picking up their first two wins on the season beforehand over the lowly Red Wings at home. Chicago will now get another chance to show the world they can still beat anyone other than the worst team in hockey on Wednesday.

Predators Need to Get Back on Track

In five games the Predators are 2-3-0 with a 2-1 record at home. They looked to be one of the early surprises of the season with two resounding wins over the Blue Jackets but when they faced better competition like the Stars and Hurricanes they fell apart and looked like a completely different team.

This could be due to their sheer lack of power play offense from this team. They are averaging a dismal 10 percent on the power play with just two goals in their five games and are having a hard time staying out of the box themselves with 40 PIM on average as well. Luckily for them in this game they are facing a Blackhawks team who is giving up nearly four goals a game as the Predators should be able to continue their winning ways to at least beat up on bad teams like Chicago.

Finally Patrick Kane has arrived for the squad when they needed him the most. Not that he has not been scoring, he had two goals in the teams four game losing streak but no assists; which is what you need to do in order to get other players involved in a star-lacking squad like Chicago.

Now in the two games the Blackhawks have won, Kane has at least one assist in both with a combined plus/minus of four.

The one thing that has also been working for this team is their powerplay. Unlike Nashville, they have been deadly on the powerplay with nine goals so far and having nearly a 50 percent effective average when up a man. But still, this appears to be the only way they can actually score goals against teams and even then it isn’t enough when they are consistently giving up at least three each game.

Who wins NHL tonight between Blackhawks vs Predators:

I liked how Chicago came out to score the game’s first goal on Monday, but they lacked the ability to even hold it because they couldn’t score over two goals to keep it. To consistently win in this league, consistent scoring is obviously a factor and they have a hard time getting three goals against teams not named the Red Wings. I will back any opponent of Chicago until they prove otherwise.