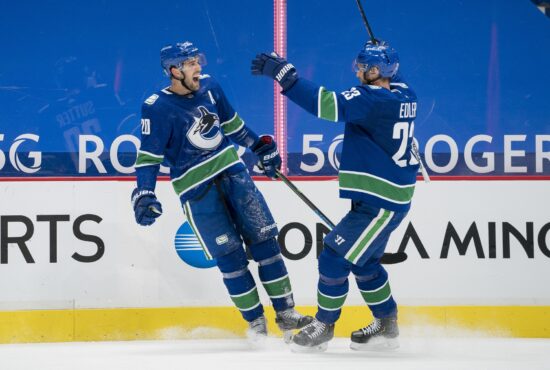 The Senators vs Canucks game on Friday finished 7-1 in favor of the boys from Vancouver. Can Ottawa players get their revenge two days later or the same scenario is going to play out once again? The thing is that the Vancouver Canucks haven’t been very consistent in the 2021 NHL season. The Ottawa Senators, on the other hand, have been consistent in losing – they’re on a losing streak of five games.

Big Win for Vancouver in Senators vs Canucks Game 1

The first duel of the season between these two finished 7-1 in favor of the Vancouver Canucks. That’s the biggest win in the NHL North Division so far. In fact, only one game in the entire season saw a larger win margin (Colorado Avalanche vs St. Louis Blues 8-0). The 7-1 win also got the record for the biggest win in the Senators vs Canucks matchups in the 21st century.

The man who stole the show in that game was Vancouver’s center Brandon Sutter who scored a hat-trick. This puts his total goal tally to four, which is one fewer than the number of goals scored by the team’s top-scorer Bo Horvat.

Speaking of Horvat, he’s the player with the most points in the roster of Vancouver, with 10. In the game against Ottawa, he didn’t score but we did see him making two assists. Another player who impressed in that game was Tanner Pearson, with one goal and one assist.

Vancouver Is Lacking Consistency in 2021

The record of the Vancouver Canucks in 2021 is 2-1-0-5, which puts them in 5th place in the North Division. The ‘Nucks started the season with a win over the Edmonton Oilers but then lost to the same opponent in their second meeting.

From there, they went on to lose two games in Calgary, against the Flames. Then, they won against the Canadiens in the overtime in their first meeting of the season. Their next two games were losses for the Canucks.

If you’re wondering what’s behind this team’s pretty poor start of the season, the reason is the COVID-19 outbreak. There were some points this season when literally half of the ‘Nucks roster was either on IR or on the COVID list.

The good news is that those days are gone now. There are only a couple of players who are struggling with fitness ahead of the second Senators vs Canucks game.

Bad Mistakes Make Ottawa the Worst Team in the NHL

With only three points after six games, Ottawa is the worst team in the league. They also have the worst score difference (15-27) and with five straight defeats, they’re the team that’s in the worst run of all the teams in the NHL.

With so many goals conceded, their defense is to be blamed the most, although the Senators’ attack has also been dreadful. Their goaltender Matt Murray made some bad mistakes against Vancouver, one of which led directly to the first goal of the game.

When it comes to the Senators’ offense, the fact that they’ve scored only 12 goals in the previous five games tells the whole story.

Who wins NHL game tonight between Senators and Canucks:

The ‘Nucks should win it, although probably not as dominantly as they did in the Senators vs Canucks game on Monday evening. Still, we should see many goals once again.