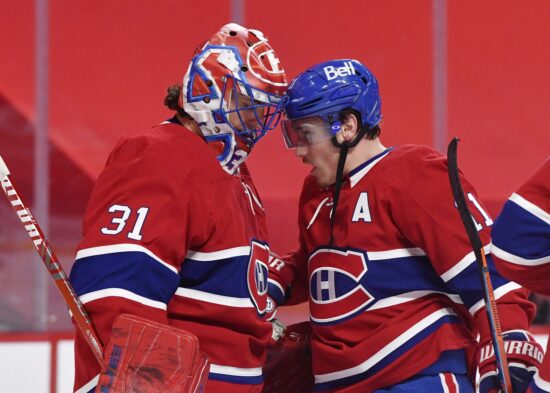 The Montreal Canadiens look to start their first winning streak under new coach Dominique Ducharme as they picked up their first win under the new boss with a 3-1 win over Ottawa on Tuesday. The Senators are pretty bad though (8-16-1), so is the real value on the Winnipeg Jets in Thursday nights matchup as +130 road underdogs?

Are oddsmakers begging the public to take Winnipeg +130 on Thursday night? The Jets definitely seem like the better team in this matchup, currently sitting in 2nd in the North and winners of 7 of their last 10. That includes a stretch where the Jets have won five of their last six games.

So why no love for Winnipeg? The Jets looked bad in a 4-0 loss at home to Vancouver on Monday but bounced back with a 5-2 win over the Canucks on Tuesday. Winnipeg has pushed their record to 6-0-1 following a regulation loss, and even though they won last time out are still 5-2 in their last 7 road games.

These two teams are definitely familiar with each other, with Winnipeg scoring a sweep over the Canadiens last week. The Jets rallied from a 2-0 deficit last Thursday to end up with a 6-3 win and followed that up with a 2-1 win (OT) on Saturday. It just goes back to why is Montreal such a big favorite for Thursday’s matchup?

One good thing you can say about Montreal is that they are playing things pretty close to the vest lately. Three of the last five Canadiens games have gone into OT, but unfortunately, they’ve all been losses. While Winnipeg sits in 2nd in the new North division with 29 points, Montreal is a couple of spots back with just a 3-4-3 record in their last 10.

Ducharme at least got his first win under his belt on Tuesday vs. Ottawa. He took over in the two games against Winnipeg starting on February 25th so at the very least the Montreal coach is comfortable in his game plan against the Jets.

The Canadiens have almost quietly put together a top 10 team in scoring this season. They also pelted the opposing goaltender, averaging 33.7 SOG which is 2nd in the league. Connor Hellebuyck has allowed 3+ goals in 5 of his last 6 starts for the Jets – a major reason why Montreal is favored here.

Who wins the Jets vs Canadiens game tonight:

The value is definitely on the Jets. There’s no way a 2nd place team should be +130 but that tells you all you need to know about this matchup. It’s a trap, and the Canadiens pull it out in a high-scoring affair.