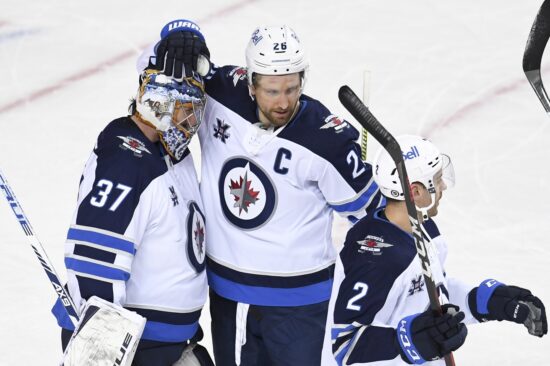 The Winnipeg Jets are currently in the #3 place in the North Division. They have 10 points more than the Calgary Flames but have also played one game more. It’s basically the same case when it comes to the #4 team, Montreal Canadiens.

Knowing that there are six games left for Calgary to play, there’s still a chance for the Flames to qualify. Still, such a scenario seems very unlikely.

With a Win Tonight, the Jets are in the Playoffs

The Jets have been in a horrible run lately, with seven straight defeats. As a result, they now have no chance of winning the divisional title. In fact, even moving up to the second spot seems impossible.

However, they shouldn’t worry much about the postseason. It’s very likely that they will get there. Further, they’ll probably get there from the #3 place.

The thing is that they have the same number of points as the Montreal Canadiens who are in the #4 spot due to fewer regulation wins.

There is only one team that still has a chance to overtake the playoff spot from either the Jets or the Canadiens. The team in question is the Calgary Flames.

The good news for the Jets is that they have a chance to get the job done tonight. If they win, they’re going to book a ticket to the playoffs.

The reason for this is that the Calgary Flames are 10 points behind them, with six games left to play. If the Jets win, the point difference between the two will get to 12 points.

In this scenario, the Flames would be left with a chance to win a maximum of 10 points before the end of the season, meaning that they would not be able to leapfrog the Jets.

This definitely sounds like a good enough reason for the Winnipeg Jets to do their best to stop their losing series.

The Flames Desperately Clinging onto Their Postseason Dreams

The chances are very slim that the Calgary Flames are going to get to the playoffs this season. Even if they manage to win all the remaining six games, they would still need other teams to lose most of their games.

However, they also get to play against the Ottawa Senators, one of the worst teams in the division.

The Flames also still have a chance to take over the #3 spot from the Jets. However, the team from Winnipeg has a relatively easy schedule ahead, with a game against the Senators and two games against the ‘Nucks.

They also have to play against the Maple Leafs in the final round, but that game probably isn’t going to matter much to them.

What this all means is that the Flames’ future is not just in their hands. They need to see their main rivals failing miserably in the remainder of the season. But, even if the Canadiens/Jets (or both) lose their remaining games, the Flames would still need to win everything.

On the bright side, four of their remaining six games are against the worst team in the Division, Vancouver Canucks. They also get to play against the Ottawa Senators, which means that there’s a decent chance that they could win 10 points in those five games.

The trouble is that they will probably need 12 points a total to get to the playoffs. What this means is that winning tonight’s Jets vs. Flames game is a must!

Who wins the Jets vs. Flames game tonight:

The Flames need a win or they can say goodbye to the postseason. The Jets don’t have to worry much about their playoff future, although a win tonight would mean ticking that box.

Obviously, for these reasons, both teams are going to be super-motivated tonight, meaning that we should see a very exciting duel, which could easily go to overtime.