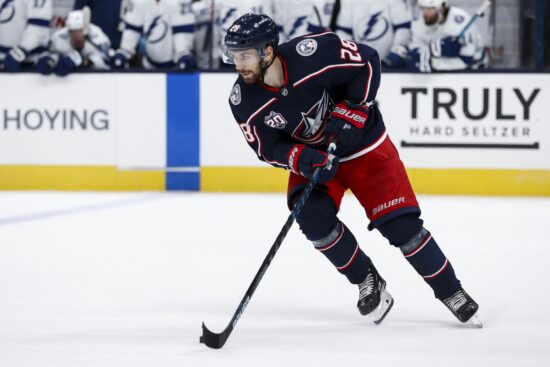 This will be the second game of this Eastern Conference series after the Lightning narrowly escaped with a 3-2 overtime victory on Thursday to keep their undefeated intact. The Blue Jackets actually scored just 21 seconds into the first period to take a one goal lead and shutout the Lightning in the opening period of play; something that nobody has done so far this season.

However, Tampa Bay scored two unanswered in the second to take a goal advantage heading into the third. The Jackets eventually tied it again with another early goal just 47 seconds into the third, but the Lightning’s Brayden Point came through in overtime with a sudden death goal to gut out the surprisingly close game.

Nobody should be shocked that this game was close however despite it featuring a Stanley Cup favorite in the Lightning. This was Tampa Bay’s first game against a different team than the lowly Chicago Blackhawks who they scored 10 goals on in two games on. Columbus is by no means a team to watch out for in the playoffs but they still proved that this Lightning team can be human and shut them out for two periods last game but still lost.

This is because Tampa Bay can only be put away for so long. Steven Stamkos scoring six points in just three games is a feat in itself but this team is also averaging just under five goals a game while opponents have still yet to score three in any game against them is just crazy.

This means that goalie Andrei Vasilevskiy of course has been on a tear by saving 94 percent of his shots faced but has still had to make over 80 saves so far in just three games. This Lightning team is good but there are weaknesses to their game finally exposed.

Blue Jackets Not as Bad as Record Shows

If you are a Columbus fan, every game has been heat-pounding. Three back-to-back-to-back one goal games with just one and two overtime losses capped off with one at home to the best team in hockey can’t have them feeling good, but they can at least be feeling optimistic. The Jackets penalty kill has been a bright spot with just one goal against them in five games and Columbus is still getting an average of 30 shots on net to show some offensive firepower.

The trouble with them is that they really don’t have an offensive weapon to go to when they are struggling to find scoring options, Right Wing Oliver Bjorkstrand has had the most points so far for the team but will it last?

I can’t pick against the Lightning until they lose for the first time. The Blue Jackets are scrappy and will most likely make it a one goal game again, but Tampa has shown they can not only come back from a deficit but win in crunch time. The same cannot be said for Columbus so far this year.