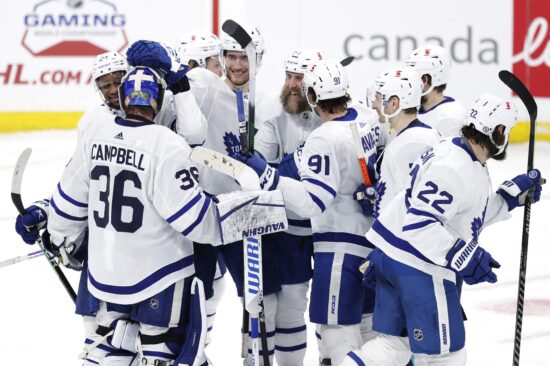 After a labored win over the Winnipeg Jets, the Toronto Maple Leafs (24-3-10) will have two easier games to play, both against the Calgary Flames (16-3-19). The first of those two matchups is on the program tonight, and whatever happens in that game, Toronto will stay at the top of the North Division table. Calgary, on the other hand, could move up to the #5 position if they do well in the two games.

Toronto Hopes to Get Some Easy Points Before Schedule Gets Ugly

There are 19 more games left for the Toronto Maple Leafs to play in the regular season. Some of those are going to be really hard – they get to play four games against the Jets and as many against the Canadiens.

On the bright side, they also have to play against much weaker opponents, such as the Calgary Flames. Two of the remaining three Maple Leafs vs. Flames matchups are on the program in the next two days. It’s obvious that Toronto is counting on four points in those games, which would get this team one step closer to the North Division title.

Right now, Toronto is on the top of the table, with four points more than Edmonton and Winnipeg, as well as one game fewer than those two.

The Maple Leafs have been in fantastic form lately, winning 11 points in the previous six games. What’s even more impressive is that they played against their main rivals in that period, the Jets and Oilers.

Although the scores in those games do not suggest the Maple Leafs were impressive, it’s the points that count after all. Still, the fact is that the largest win margin for Toronto in the previous 13 games is two goals. It happened on the last day of March when they beat the Jets 3-1, as well as in the most recent Maple Leafs vs. Flames duel, in which they won 2-0.

Nevertheless, their recent performances have cemented the Maple Leafs as one of the top candidates for winning the 2021 Stanley Cup. At the moment of writing, oddsmakers think of this team as the #4 favorite with the odds in the ballpark of +750.

Calgary’s Postseason Dreams are (Probably) Over

With 35 points, the Calgary Flames are currently in the #6 place in the North. The #4 place is within reach, as they’re trailing behind the Montreal Canadiens by six points.

The reason why they probably aren’t going to get to the last place that leads to the playoffs is that the Canadiens have played four games fewer than them. Another reason why Calgary’s postseason dreams are over is that this team’s been playing really badly over the last couple of weeks.

The Flames won only two points in the previous seven games. They did beat the Jets once, but they also lost to the worst team in the division, the Ottawa Flames, on two occasions.

Who wins the Maple Leafs vs Flames game tonight:

The Toronto Maple Leafs should win it. In fact, anything but an easy win for the North Division leaders would be a huge upset.