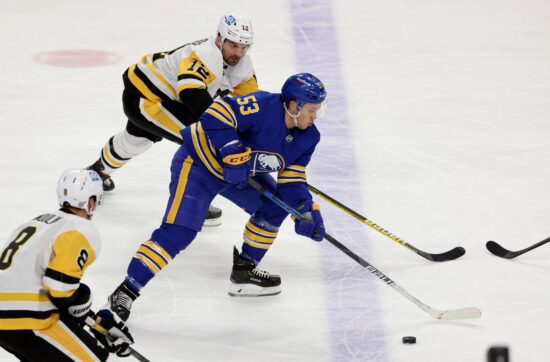 The Pittsburgh Penguins are currently on level points with the East Division leaders, the Washington Capitals. With a little bit of luck and four points from the next two Sabres vs. Penguins games, the Pittsburgh franchise could win the divisional title.

The Pens have the same number of points as the Caps but are one place behind them. The reason? The Capitals have one more regulation win than them.

Unfortunately for the Pens, that’s not the only advantage their title rivals have. The Capitals have also played one game fewer than them.

On the bright side, the Capitals have to play two games against the Flyers, as well as one against the Bruins in the remainder of the season. Plus, they’re probably going to be without their captain Ovechkin, who’s out with an injury.

The Penguins have a much easier task in front of them. They only have to play two more Sabres vs. Penguins games before the end of the season. Facing the team from the bottom of the table automatically makes them favorites in those games. However, there’s another reason for this – Pittsburgh players have been in a scoring mood lately.

Buffalo to Stay at the Bottom of the Table

The Sabres are six points off the 7th spot at the moment. With two games left to play, there’s no chance for this team to get away from the bottom of the table.

They’ve known this for a while, but that hasn’t stopped them from playing decent hockey over the last couple of weeks. In fact, since swapping Ralph Krueger for Don Granato as the head coach, the Sabres have been playing really well.

They’re going into tonight’s game following two straight wins against the New York Islanders, a team that’s secured a spot in the playoffs. The Sabres would like to get at least one more win before the end, but that’s not going to be easy against in-form Penguins.

Not only are the Pens a better team, but the Sabres are also struggling with injuries. There are at least eight players who will miss this game, including Buffalo’s rising star, Jack Eichel, who’s their third-best assist maker.

The Penguins should win this one. In fact, they should win both Sabres vs. Penguins matchups. They’re the better team, and unlike the Sabres, they still have something to play for – the East Division title.