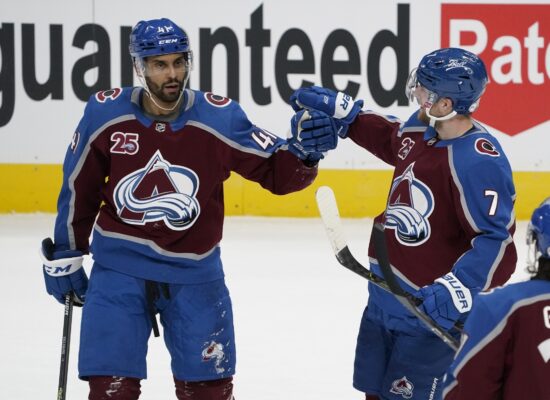 Wow, what a turnaround the Wild have done to their season this year. After barely scraping by on overtime wins to start out, they have worked their way to second place in the division with 37 points and a 18-8-1 record. Meanwhile, the Avalanche have done a great job at being a steady and consistent team all season never dipping below for long at the top of the leader board. They are currently one point behind the Wild at 36 points and have a 17-8-2 record on the year. This one will be fun no matter who wins.

Colorado has won their last four games in a row and only letting in six goals total in the process. Sure it was against the likes of the Ducks, Coyotes and Kings, but this team has been a model of steady play all year. Their team averages 3.19 goals per game while giving up only 2.37.

They have been lead all season by the combination of Mikko Rantanen and Nathan MacKinnon. Rantanen leads the team in points with 30, but Mackinnon’s 17 assists have lead to some nice goals and blowout wins like their 8-4 victory over the Ducks. If these two can keep clicking, I don’t see any reason why they shouldn’t win this game and eventually the Western Division.

Wild Having a Wild Fun Season

The incredibly young star Kirill Kaprizov has had a monster year and is the main reason why this team has turned their season around. He already has 25 points on 10 goals and 15 assists, but he has acted like a spark plug for the rest of an offense that would be somewhat dreary without him.

The Wild have the exact same stats as the Avalanche with a goals for average of 3.19 and a goals against average of 2.37. The only problem with them is that they have committed way more penalties than Colorado, with over 40 more minutes spent in the box. This is a team of young talented mix with veterans, so they must show them how to compete in close games like this one will be without a doubt.

Who wins the Wild vs. Avalanche game tonight:

For whatever reason, I not buying the hype around the Wild. They are a good team but I think the consistency the Avalanche have shown all year will be the key factor in this one when both sides are extremely talented. If Colorado can bottle up Kaprizov somehow and make other players score I think they will eventually wear down Minnesota and secure the win on home ice. I will take the over in the goal total though because these teams can score no matter who is in the net.