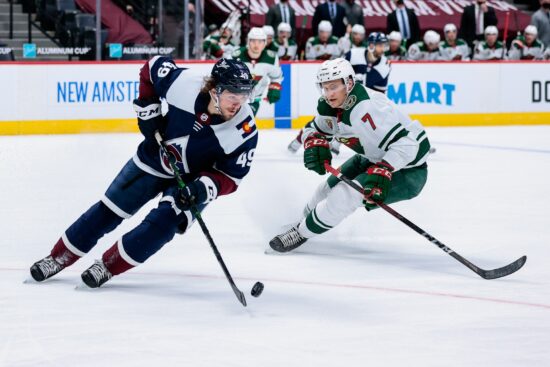 A couple of red hot teams meet up at Ball Arena in Denver on Saturday afternoon. The Minnesota Wild come into this matchup after just having their 5-game win streak broken by the Colorado Avalanche, 5-1 on Thursday night. That victory was the 5th in the row for the Avs, who are lofty -169 favorites in the rematch.

Wild Try to Find a Way on the Road

The five game win streak for Minnesota all came in the Twin Cities, but they also have a 2-0 and 4-3 win over first place Vegas over that span. The Wild also beat Arizona three times during the stretch, outscoring the Coyotes 11-1.

All the momentum of that Minnesota win streak was deflated with a dominating 5-1 Colorado win on Thursday night. The teams still play each other very evenly this year, with the Avalanche now leading the series just 3-2. The Wild tallied a 6-2 win in Denver back on February 24th while also wrapping up a 6-game West Coast road trip so there’s value on Minnesota at the +150 number.

The big question heading into Saturday afternoon’s matchup is how goaltender Cam Talbot’s psyche is doing? He gave up 5 goals on Thursday, but it really wasn’t that bad of a performance considering Minnesota allowed an insane 55 SOG in that game. Talbot has still allowed 4+ scores in 4 of his last 6 appearances though.

Avs Had an Easy Time Thursday

Colorado basically played a glorified practice in their 5-1 win over Minnesota last time out. They peppered Talbot with 55 shots, while their own goaltender Philipp Grubauer only had to face 20 SOG from the Wild. The big dogs stepped up too, with the top line of Nathan Mackinnon, Gabriel Landeskog, and Mikko Rantanen netting four of the five scores.

Things could look very similar in Saturday afternoon’s matchup. The Avs will be playing their 9th straight game in Denver, a place they are 11-4-1 on the year. Colorado has buckled down to win five straight on their own ice, holding opponents to a goal or less in four of those games.

Grubauer is clicking right now, but of course it also helps when you only have to face a total of 20 shots. He’s now allowed just 3 goals in his last 5 starts though, and has faced 20 SOG or less in 5 of his last 6 starts. If the #6 Colorado defense continues to play this way coupled with their explosive offense, you’re looking at a legitimate Stanley Cup contender.

Who wins the Wild vs Avalanche game tonight:

It’s hard going against the Avalanche right now, but Minnesota has had a game to get used to traveling for the first time in two weeks. These two teams have just matched up well this season, and the better value is on the Wild.