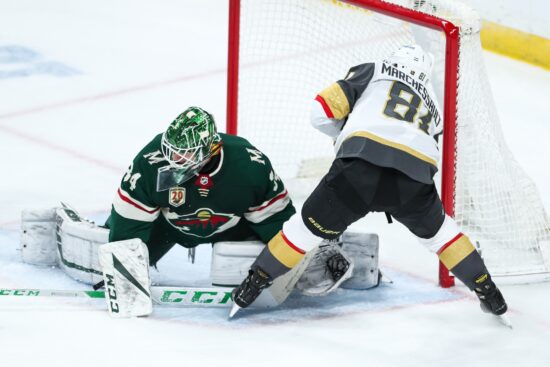 The Minnesota Wild make another trip to Sin City when they start a two game series with the Vegas Golden Knights on Thursday. The two teams have split four games so far in 2021, with each winning two on their own ice. Minnesota doesn’t look to be in a great spot to change that, coming off two straight losses in San Jose.

Minnesota Looking for a Turnaround

With the realigned West division for this season, it’s tough for West Coast teams to make the journey across the Mississippi River as evidenced by Minnesota’s 13-3 record on their own ice. The flip side of that of course is the Wild struggling when they head back the other way, with the team going 8-8-2 in road games.

Those West Coast struggles were on display the last two games in San Jose, with the Wild falling 4-3 (SO) and 4-2 as -155 and -145 favorites respectively. The only good news about Minnesota having to make the short turnaround after Wednesday’s loss at the SAP Center is that Vegas does too, also on 0 days rest after a 4-2 loss to the Kings, albeit at home.

Minnesota also started Kaapo Kahkonen on Wednesday, meaning Cam Talbot is available in the series opener vs. Vegas. Talbot gave up 3 goals in a loss to the Sharks on Monday, but also while facing a whopping 39 shots (.923 save %).

Maybe Minnesota didn’t use the best strategy in saving Talbot for the second leg of the back to back. He started both games in Vegas earlier this season, allowing 9 goals on 66 shots. Minnesota was able to salvage a point in one of those, a 5-4 loss on March 1st. Can they also steal a point on April 1st as +155 underdogs?

Another thing that doesn’t really hurt the Golden Knights is the 0 days rest, at least in net. Vegas has the best two-headed monster in the league in Robin Lehner and Marc-Andre Fleury. Somewhat unfortunately for Minnesota is that Fleury, who has been struggling lately, got the start and allowed 4 goals on 30 SOG to the Kings. Fleury has now allowed 4+ goals in three of his last five.

Fleury starting on Wednesday means the Wild get a date with Lehner on Thursday. He missed over a month with an injury, but has returned to allow 4 goals total in his three starts back. This will be the first time facing Lehner this year for Minnesota.

Who wins the Wild vs Golden Knights game tonight:

If Fleury was in net maybe you give Minnesota a chance here, but it’s looking like this could (should) be another big Vegas win.