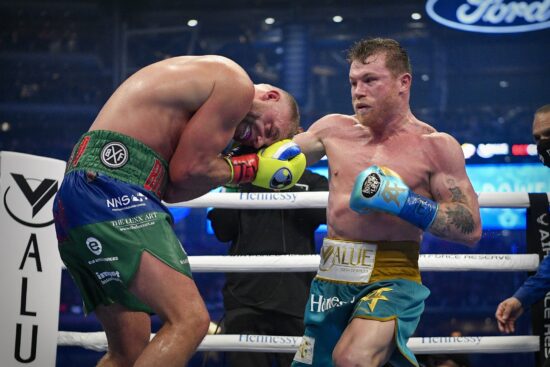 History will be made in one of the biggest boxing events in 2021, as the first-ever undisputed super middleweight champion will be crowned on Saturday, 6th November. But, will it be Canelo Alvarez or Caleb Plant getting their arm raised at MGM Grand Garden in Las Vegas?

There is little doubt that Canelo Alvarez will go down in the history books as one of the best-ever boxers. The Mexican superstar has won world titles in four different weight classifications, ranging from light middleweight to light heavyweight, and has unified three different weight classes. Seen by many fans, as well as ESPN, The Ring, and BoxRec as the best pound-for-pound fighter on the planet, he will be looking for more history in November, as he bids to come the first-ever undisputed super middleweight champion.

Few would argue against his chances of achieving that, as he has tools in his arsenal that very few opponents are able to deal with. His excellent counterpunching ability, as well as excellent body punching power, are both attributes that Plant will need to find a plan to avoid. It is exciting for fight fans that this will be the third time that we will see Canelo this year, as he has already beaten Avni Yildirim and Billy Joe Saunders inside the 12 rounds. His win over the latter saw him pick up the WBO title, leaving just the IBF in Canelo’s sights.

Caleb Plant will only be too aware of the size of the challenge on his hands, but he brings into this fight a very impressive record. He has a perfect 21-0 record, and is seen by ESPN as the second-best active super middleweight in the world. Plant has taken a slightly different approach in the build-up to this fight, as he has looked to play mind games with Canelo, which led to a confrontation between the two at the first press conference.

It may not have done his odds any favors that Canelo was able to avoid punches thrown by Plant on that tense evening, while also landing one leading to the American being cut open. Few would argue that it would be hard to see the actual fight going in any other direction. This will be the most difficult test of his career, as it presents a huge step up in opposition. Plant’s last victory came at the beginning of 2021, as he beat Caleb Traux by unanimous decision to successfully defend his IBF title.

Who will win the super middleweight unification bout:

This will be a historic night in the world of boxing regardless of the outcome. However, it is very hard to look past the favorite in the betting, as Canelo is one of the all-time greats and unifying the super middleweight division is just another piece of history for the Mexican. We struggle to see it going the distance, and expect Canelo to end the fight inside six.