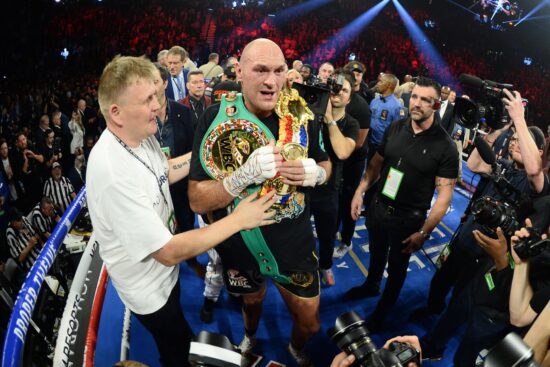 Even though their fight had been agreed upon a few days ago, both Tyson Fury and Anthony Joshua will have other opponents for their next matches.

Fury vs. Wilder Trilogy to Conclude in July

Top Rank’s CEO, Bob Arum, suggested that the boxing world might witness the Fury vs. Wilder trilogy finale on July 24, alternatively August 14, which is the backup date.

The arbitration ordered Fury to have the third match with Wilder until September, which created multiple problems for the current WBC champion. His contest with Anthony Joshua had to be canceled, and all the previous arrangements these two guys had, simply went down the drain.

This event was supposed to decide the undisputed heavyweight champion, but it seems that we have to wait for that to happen for quite some time.

Instead of this, we will have the third bout between Fury and Wilder, who met a year ago in an event called the “Unfinished Business” on February 22 at the MGM Grand Garden Arena in Las Vegas.

Fury would win via TKO in the seventh round, once Wilder’s corner threw in the towel to stop the Brit’s flurry of vicious punches that pretty much obliterated his opponent. During that fight, Wilder suffered a torn eardrum.

The deal between the two was to have another battle. But in the meantime, the Coronavirus had spread throughout the world, putting all the sports action on hold. As time went by, Fury’s team decided to move on from the previous deal because they believed that Wilder stalls too much.

In the end, a neutral arbitrator (Judge Daniel Weinstein) had to bring the decision about this case, and the final verdict was that Fury needs to stick to his previous agreement with Wilder and move away from the Joshua fight.

The champion in three other versions, WBA, WBO, and IBF, Anthony Joshua, was heavily disappointed because of the recent development, and he didn’t hide his anger. The 31-year old was very candid on social media, trash-talking with Fury, whom he accused of feeling away from the battlefield.

In the meantime, his promoter, Eddie Hearn, indicated that Joshua, too, might have a new rival this year. According to his words, that would be the Ukrainian superstar and the former undisputed cruiserweight champion Oleksandr Usyk.

The Cat was the first boxer in history to hold all four major titles, WBO, WBC, WBA, and IBF but vacated all of them to move up in the heavyweight division and challenge the best big dogs.

He’d defeat Derek Chisora on March 11, 2020, becoming the mandatory challenger in the WBO version, and challenging Joshua, who holds that belt.

Hearn revealed a mutual desire between Joshua and Usyk for this match to happen, which we might expect this fall.