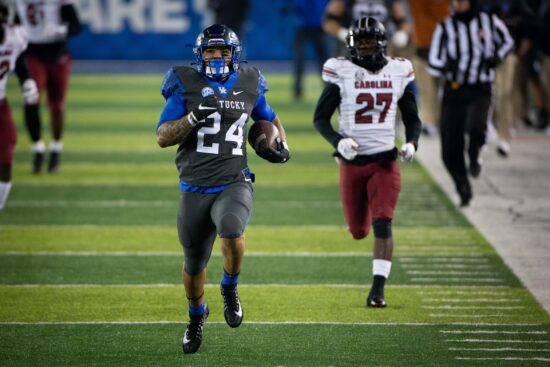 On the second day of 2021, the NC State Wolfpack squares off with the Kentucky Wildcats in the 76th edition of the Gator Bowl. The two programs have met three times in history, although all of those games happened a long time ago. The most recent NC State vs Kentucky game happened in 1970.

Despite getting a 4-6 record this season, the Wildcats are coming into the 2021 Gator Bowl game as the underdogs. Their opponents, the Wolfpack, had a much better season, with the 8-3 score. Furthermore, they won their previous four games. Can they add another one to the streak? Let’s see!

The Kentucky Wildcats are one of a few teams with a negative record to get an invite to one of the college bowls. The reason for this is that despite losing six games in 2020, they did play some really tough teams. In fact, the Wildcats played against five ranked opponents this season. They managed to beat one of those teams (Tennessee), while losing the other four.

Same as Kentucky, NC State also faced five ranked opponents. However, this team did slightly better in those games. The Wolfpack beat two ranked teams in 2020 (Liberty and Pittsburgh) while losing to the other three. They’re entering the 2021 Gator Bowl as a ranked team, currently sitting in #23.

Kentucky Offense Ready to Step Up

The offense was Kentucky’s main problem in the 2020 season. We saw them struggling to score, finishing the season with only 21.7 points average. In five games, they failed to score more than 13 points. The good news is that they’re entering the 2021 Gator Bowl after an impressive offensive display against South Carolina.

They did come into that game as the favorite, but not many people believe they would score 41 points, more than in most other games in 2020.

The man they’re putting their hopes in is the senior quarterback Terry Wilson. In 2020, he became the first player in the history of Kentucky to pass for 3,000 yards and rush for over 1,000 yards. Wilson is very likely to start as the QB for Kentucky in the Gator Bowl, but their coach Mark Stoops has hinted the other two QBs, Joey Gatewood and Beau Allen, might get a chance.

NC State Have a Good QB As Well

The nephew of former Kentucky QB Ryan Hockman, Bailey Hockman is NC State’s starting quarterback at the moment. He got his chance after Devin Leary broke his fibula in October. Since then, Hockman played six games as the starter, in which his team got a 4-2 record.

He currently has a 63.7 passing percentage, throwing for 1,820 yards and 12 touchdowns. In the six games with Hockman as the starting QB, his team scored a total of 174 points, which accounts for 29 points per game on average, which is slightly lower than their entire-season average (30.81).

It’s been a rough year for Kentucky, not only on the court but off as well. This season, they lost one of their coaches to cancer (John Schlarman), while one of their star players (linebacker Chris Oats) ended up in a hospital for several months. This program would love to start the new year on a positive note. It’s not going to be easy to beat NC State, but Kentucky definitely look capable of winning the 2021 Gator Bowl.