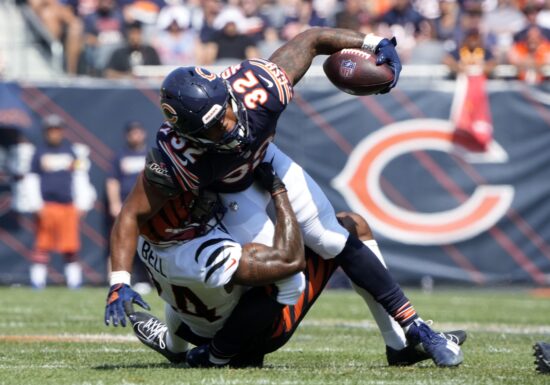 This has been a very difficult season for either of these two franchises. The Bears got their long-term solution at the QB position drafting Justin Fields, but he didn’t amaze anybody so far.

Meanwhile, the Giants are struggling in all aspects of the game. Injuries have taken a toll on this team, slowing down their development and hurting the prospects for making a notable result. All in all, they are both out of the NFC playoff hunt.

Not only did they post a losing season, but the Giants suffered a couple of very tough hits that might have a long-term effect on their roster. QB Daniel Jones picked up a neck injury, RB Saquon Barkley is still recovering from his injuries, and he is definitely not at the needed level. At the same time, WR Sterling Shepard tore his Achilles, the worst damage one professional athlete can suffer.

With Jones on IR, the Giants started the last game with Jake Fromm at the QB position. He would have a miserable performance with 25 yards thrown and one pick, being benched during the contest. Meanwhile, his replacement, Mike Glennon, posted 93 yards for a TD and an interception.

Barkley carried the football 15 times for only 32 yards, and didn’t have a noticeable impact on the game. Evan Engram caught the only TD pass in this one.

In his first start this year, Nick Foles has posted a very good game, and the Bears looked like a serious team. It is a pity that Matt Nagy didn’t give the former Super Bowl champion a chance much earlier because his unit might have been in the playoff hunt.

Foles threw 250 yards for a touchdown, without interceptions, in Chicago’s 25-24 win over the Seahawks at Lumen Field. The other veteran, TE Jimmy Graham, caught that one TD pass, while two other scores were on the ground, with David Montgomery and Khalil Herbert carrying the football into the endzone.

Robert Quinn was masterful in defense once again, racking a sack, his 17th of the year, which puts him in second place in this category. We are still sure that the Bears’ defense is among the top five in the league when healthy and complete, but the problems in different areas prevent them from getting enough credit.

After seeing the Giants’ QBs in the last event, we pretty much have no doubts that the Bears are going to win. With Foles in charge, they look very stable and consistent in offense, while on the other side, the defense is very good throughout the entire year. Therefore, the Bears are winning this one.