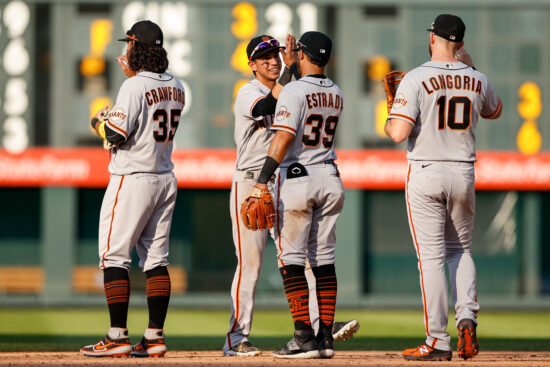 The San Francisco Giants want to win the National League West and have the National League playoffs come through Oracle Park. The last thing they want is to have to play a one-game play in to travel to another stadium. The Rockies come up on the Giants schedule at a good time, as the Giants have beaten the Rockies 10 out of the 14 matchups, with four more to play after tonight’s game

The Giants Have The Best Record In Baseball

Despite having the best record in baseball, the Giants only hold a one-game lead over the surging Dodgers. Luckily for the Giants, the struggling Rockies popped up on the schedule. Another positive the Giants have in their favor is their starting pitcher, Logan Webb. Webb has pitched in 21 games this season, posting a 8-3 record with a 2.58 ERA with 121 strikeouts. The Giants are an astounding 17-4 in Webbs starts in 2021, including a 2-1 record in the three games against the Rockies. If there is one downside to Webb, is that his one loss to the Rockies this season came at Coors Field, where he gave up six runs in 3.2 innings.

Luckily for the Giants, their starting pitchers have been astounding, because their offense has been a bit dull lately, posting 3.5 runs per game in their last ten. A big contributor to that 3.5 runs per game is the ten runs they put up Monday night in Coors Field against the Rockies.

Of the Rockies remaining 24 games, 15 are against teams that are currently holding a playoff spot, or fighting for one. That continues tonight when the Rockies send Chi Chi Gonzalez to the mound. The five-year veteran has posted a 3-6 record with an abysmal 6.13 ERA in 98 innings pitched this season. Despite the Coors effect, Gonzalez actually has better stats at home this season, posting a 2-1 record with a 5.72 ERA in 11 games. The ERA isn’t good to say the least, but its better than the 6.56 ERA on the road.

Despite the 5-5 record over their last ten games, the Rockies have been better offensively than the Giants, averaging 4.5 runs per game. The Rockies are definitely fans of home cooking this season, posting a 45-24 record at home while posting an 18-50 record on the road. The runs scored aren’t even close either, scoring 178 more runs at home than they have on the road this season.

Who Will Win Tonight’s MLB Game?

The Rockies play exceptionally well at home this season, but the Giants have been playing well everywhere this year, posting the best record in baseball. Not only are the Giants successful offensively, but Logan Webb has been almost as an unmovable force this season. Look for Webb to give up some runs, but ultimately the Giants will come out on top.