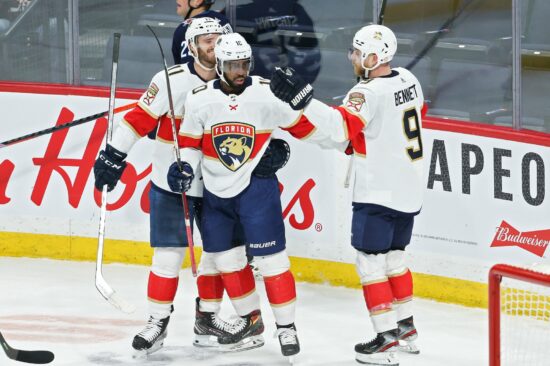 Two leaders of their respective divisions meet in the NHL on Thursday night, as the Florida Panthers welcome the Vegas Golden Knights to the FLA Live Arena. Both sides will be looking for wins to strengthen their respective positions in the division standings.

No side in the NHL has won more games at home this season than the Panthers, as they have picked up 21 wins from the 26 games that they have played. Their only three defeats have all been suffered in regulation time, which means that they are yet to lose in overtime. Furthermore, they have the best-attacking record in the East.

The Panthers bounced back following their defeat against the Seattle Kraken on the road in their latest game against the Winnipeg Jets. They scored three times in the opening period, before adding further goals in the second and third to win 5-3. Mason Marchment scored twice in the win, and also added an assist.

The Vegas Golden Knights are still leading the Pacific Division, but they were beaten in their latest outing in the NHL. Vegas has won four of their last ten games in the league, while they have suffered three losses in regulation time and three in overtime. While they are leading the division, they have dropped to fifth in the Western Conference overall standings.

The Golden Knights have won 53 points from the 43 games that they have played, which still gives them a solid cushion in the race for playoff places. Vegas has won 12 of their 18 games on the road this term, with the majority of their losses coming at the T-Mobile Arena.

The Golden Knights saw their two-game winning run brought to an end in their last fixture, as they were beaten 4-3 in overtime by the Carolina Hurricanes. Nolan Patrick, Brett Howden and Nicolas Hague scored the goals in regulation time for the Golden Knights in that defeat.

It should be a high-quality fixture in Florida on Thursday evening, but the preference is for the Florida Panthers to get the win. However, we could see high-scoring first and second periods in the game.