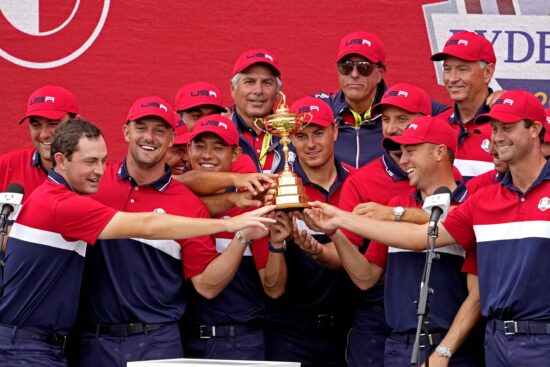 One of the most exciting golfing events on the calendar is slowly creeping into sight, as the Ryder Cup 2023 gets underway in just over 12 months’ time. The event will be hosted at the Marco Simone Golf and Country Club in Italy, as Team Europe will be looking to make home advantage count against Team USA in their bid to regain the Ryder Cup.

Team USA boasted an excellent crop of world-renowned players for the previous Ryder Cup, as the team was nicknamed the ‘Dream Team’. They were able to follow through on regaining the Ryder Cup, with many narratives heading into the competition centered around the ongoing feud between Bryson DeChambeau and Brooks Koepka. However, when it comes to the teams that could play in the competition next year, there is already a lot of confusion.

The impact of the LIV Tour golf series is leading to mixed responses from the two teams. Team Europe has made their stance very clear, with captain Henrik Stenson stripped of the responsibility after joining the Saudi-backed breakaway tour. However, the U.S. team may be tempted to go the opposite way with their position. Following Team Europe would mean that Koepka, DeChambeau, and Dustin Johnson would all be ineligible for selection. However, it looks likely that they will also ban LIV Golf players.

Despite the ongoing confusion centering around the LIV Golf players and whether they will be selected for the Ryder Cup 2023, there still appears to be no shortage of quality on both sides. Team Europe will be led into battle by Luke Donald. He was announced as the replacement for Stenson.

Meanwhile, non-LIV players that look set to make up his team for the competition in Italy, include Rory McIlroy, Matt Fitzpatrick, and Jon Rahm. Shane Lowry, Tommy Fleetwood, and Seamus Power are also likely to be named in the team, as well as Viktor Hovland.

There’s little doubt that Team USA will be slightly weaker without the LIV Golf players, but there is still excellent quality. Zach Johnson will captain the U.S. team, with major winners Scottie Scheffler and Justin Thomas among the players that will be included. Other players that could be representing the holders next year include Xander Schauffele, Will Zalatoris, and Patrick Cantlay.

It may still be over a year away, but the betting market for the Ryder Cup is already open. The United States hasn’t won in Europe since 1993, with Team Europe winning each of their previous six home tournaments. Given that major trend, it could be worth siding with Team Europe at the current prices.