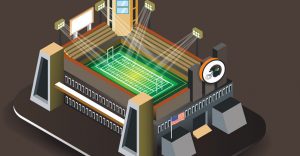 One of the most intense rivalries in the NFL continues this Sunday, in Week 1 of the NFL 2020 seasons as Minnesota Vikings host the Green Bay Packers.

These two teams are the top candidates for winning the NFC North, and by all means, are one of the contenders for going all the way. Vikes had a busy offseason, and are coming in this campaign sharp and pretty fired-up. On the other side, the Packers are aiming high, as always. Last year’s trashing in the NFC Championship Game left a massive question mark beside their name, and Matt LaFleur is eager to erase it.

When, Where, and How to Watch Green Bay Packers vs. Minnesota Vikings

Where: US Bank Stadium, Minneapolis, Minnesota

Cousins Wants to Prove His Worth

Captain Kirk finally won the first game in the playoffs, but he still isn’t considered to be an elite quarterback. Sorry Vikings’ fans, but that is the truth. The entire NFL community has massive doubts in his abilities, especially in clutch moments. He signed an extension this offseason, becoming the ultimate leader of the team.

Yet, Cousins lost his No.1 target, Stefon Diggs, who was traded to Buffalo, after being toxic for the locker room. Justin Jefferson will be there to fill in that gap, with the young WR coming from this year’s draft as the 22nd overall selection. RB Dalvin Cook is expected to take over the torch from Diggs and become the No.1 offensive piece in this team.

Vikes released CBs, Xavier Rhodes, and Trae Waynes, but Jeff Gladney was picked up in the first round to replace them.

Same old in terms that the management makes all the wrong moves. They would pick up QB Jordan Love at the draft to send a “message” to Rodgers instead of taking a wide receiver and finally handing one of the best QBs of all times a proper weapon. And again, all the eyes will be pointed towards AR even though nobody understands that he can’t function without a decent target.

Yes, he has Davante Adams, but he has only him and nobody else. What if he gets injured at some point? Devin Funchess was supposed to be the No.2 WR, but he opted out before the season started.

The only guy who will help Rodgers do something in the offense is the RB Aaron Jones, who had 16 TDs last year. And also, not to mention the defense, which is one of the best in the league. Preston and Za’Darius Smith, Jaire Alexander all these guys are fantastic and lead one of the best defensive units in the NFL.

Green Bay won both matches last year, and they did it because of a strong defense that allowed 26 points combined in those two contests. The game in Green Bay ended 21-16 for the hosts, and the second one was 10-23 for GB.

Over/Under limit for Sunday’s clash is 45.5 points, which is too much for us. Both sides will run a lot, and having in mind that their WRs (especially Vikings’) didn’t have too much time to get to know with QBs, the ground game would be the primary option. Therefore, under.